Edmund Burke and the Sublime

The idea of the sublime is central to a Romantic’s perception of, and heightened awareness in, the world. It was Edmund Burke, who in 1757 published a treatise of aesthetics called A Philosophical Enquiry into the Origin of our Ideas of the Sublime and Beautiful, and therefore provided the English Romantic movement with a systematic analysis of what constitutes the sublime, and the various qualities which it possesses, and hence gave the English Romantics a theoretical foundation, and a legitimacy, to their artistic expression.

Burke (1729-97) was born in Dublin and educated there at Trinity College. He is best known for his political achievements: firstly as a Whig MP; and then as the founder of modern conservatism with the publication in 1790 of the Reflections on the Revolution in France, in which he expressed mistrust in the rationalism of the French Revolutionaries, who believed that politics can be conducted according to a priori principles not rooted in previous experience and practice. Yet much earlier in his life, when only 28 years old, and whilst establishing himself in literary London, he wrote his Enquiry, which precedes the publication of Lyrical Ballads by Wordsworth and Coleridge, by 41 years.

Consistent with the dominant philosophical way of thinking in Britain during his life, Burke was an empiricist. That is, he believed that the formation of our ideas, and our knowledge of the natural world, is derived from our sensory experience, which is determined by our senses, perceptions or passions (feelings or emotions). This is to be contrasted with the rationalist school of thought, which asserts that knowledge of innate ideas can be arrived at through intuition and reasoning alone, independently of the passions. For Burke, it is the passions (as represented in our imagination), not reason, which determines how and what we see, hear and feel in the world.

Like most empiricists, Burke sought to apply a scientific method to his chosen subject-matter, so in the Enquiry he undertakes a scientific investigation into our various passions, and uses the collected evidence to explain the nature and power of the sublime. His Enquiry opens with an introductory discussion on taste, where he observes that although we have a shared sensory apparatus, our idea and knowledge of a particular taste (and whether we like it or not) is the product of our own individual physical experience, combined with our social and cultural context:

Thus opium is pleasing to the Turks, on account of the agreeable delirium it produces. Tobacco is the delight of Dutchmen, as it diffuses a torpor and pleasing stupefaction. Fermented spirits please our common people, because they banish care, and all consideration of future or present evils.

Burke then turns to his observations on the sublime. He asserts that ideas of pain are much more powerful than those of pleasure, and that the strongest pain of all is the fear of death, which causes terror. As such:

Whatever is fitted in any sort to excite the ideas of pain, and danger, that is to say, whatever is in any sort terrible, or is conversant about terrible objects, or operates in a manner analogous to terror, is a source of the sublime; that is, it is productive of the strongest emotion which the mind is capable of feeling.

The sublime, then, is our strongest passion, and it is grounded in terror. Yet it is not exclusively an unpleasant emotion, for danger or pain can, in certain circumstances, give us delight. And the sublime has other qualities: it overwhelms our faculty of reason, such that we are rendered incapable of rational thought. As Burke puts it:

The passion caused by the great and the sublime in nature, when those causes operate most powerfully, is Astonishment; and astonishment is that state of the soul, in which all its motions are suspended, with some degree of horror.

This heightened state of astonishment, where reason is driven out by “an irresistible force”, and “the mind is so entirely filled with its object, that it cannot entertain another”, is more terrible to us when it is accompanied with a sense of the unknown (or what Burke calls obscurity). For Burke, obscurity is an absence of clarity, whether in the sensory darkness of sight (or blinding lightness), or mental uncertainty of thought. As he observes, “everyone will be sensible to this, who considers how greatly night adds to our dread”. He notes how religions have used darkness to create fear, such that “the druids performed all their ceremonies in the bosom of the darkest woods, and in the shade of the oldest and most spreading oaks”. Further, it is vastness, or “greatness of dimension”, which is “a powerful cause of the sublime”, where “looking down from a precipice” on a mountain has greater impact depending of its depth and steepness, and where “the effects of a rugged and broken surface seem stronger than where it is smooth and polished”. Finally, another source of the sublime is what Burke calls infinity, where the eye is not able to “perceive the bounds” of something, or “see an object distinctly”, and this gives rise to a “terrible uncertainty of the thing” perceived. For Burke: “Infinity has a tendency to fill the mind with that sort of delightful horror, which is the most genuine effect, and truest test of the sublime”.

Burke believed that poetic verse is the most powerfully effective art form in evoking an emotional response, and Milton’s Paradise Lost the finest example of “heightening, or of setting terrible things”. In Milton’s description of Death, says Burke, it “is astonishing with what a gloomy pomp, with what a significant and expressive uncertainty of strokes and colouring he has finished the portrait of the king of terrors. The other shape, If shape it might be called that shape had none Distinguishable,…….black he stood as night: Fierce as ten furies: terrible as hell:…… In this description all is dark, uncertain, confused, terrible, and sublime to the last degree.”

It is, for Burke, “the terrible uncertainty of the thing described” which generates the fullest emotional force. Take Milton’s portrait of Satan:

…Stood like a tower; his form had yet not lost
All her original brightness, nor appeared
Less than archangel ruin’d, and th’ excess
Of glory obscured: as when the sun new ris’n
Looks through the horizontal misty air Shorn of its beams;….. 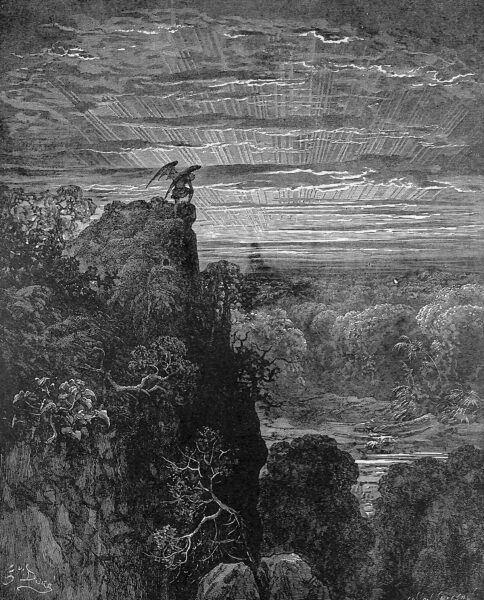 For Burke, these “images raised by poetry” of Death and Satan are of an obscure and infinite kind and are “great and confused”, and only great because they are confused: to obtain clearness is to “lose much of the greatness”, such that “A clear idea is therefore another name for a little idea.” This leads Burke to assert that painting is inferior to poetry: “When painters have attempted to give us clear representations of these very fanciful and terrible ideas, they have I think always failed; insomuch that I have been at a loss, in all the pictures I have seen of hell, whether the painter did not intend something ludicrous.” (As with, perhaps, Hieronymus Bosch’s depiction of Hell in The Garden of Earthly Delights, however impressed we may be with his imaginative vision.)

Terror, horror, darkness: we can see how Burke’s elucidation of the emotional power which these qualities of the sublime hold on us would have contributed to the later 19th-century English Gothic literature; but it is also the qualities of obscurity, vastness and infinity in the sublime, “which comes upon us in the gloomy forest, and in the howling wilderness”, which made an earlier, and more significant literary impact, on the English Romantic poets. 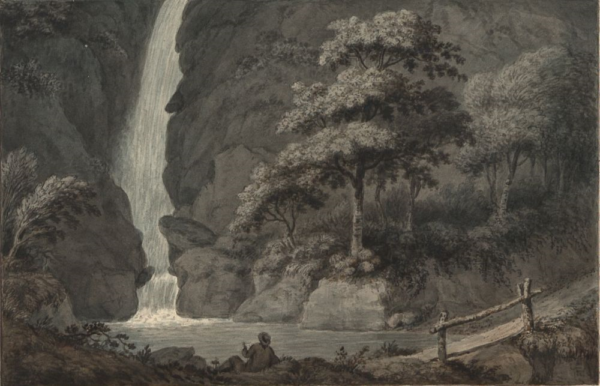 The extent of Burke’s influence is well evidenced in Coleridge. His friend Carlyon later recalled a mountain walking tour in Germany in 1799:

When we were ascending the Brocken, and ever and anon stopping to take breath, as well as survey the magnificent scene, a long discussion took place on the sublime and beautiful. We had much of Burke……Many were the fruitless attempts made to define sublimity satisfactorily, when Coleridge, at length, pronounced it to consist in a suspension of the powers of comparison.

This contribution appears to be heavily drawn from Burke’s idea that the sublime comprises a state of astonishment, where “all its motions are suspended” and the power of reasoning is lost, coupled with the infinity of an object who cannot be seen distinctly, and therefore cannot be compared against others.

On the evening of 31st August 1800 Coleridge found himself on the ridge called Striding Edge, in the Lake District. It was getting dark as he wrote in his notebook:

Am now at the top of Helvellyn, a pyramid of stones, Ullswater, Thirlmere, Bassenthwaite, Windermere, a tarn in Patterdale. Travelling along the ridge, I came to the other side of those precipices, and down below me to my left no, no! no words can convey any idea of this prodigious wildness that precipice its ridge sharp as a jagged knife, level so long and then ascending so boldly, what a frightful bulgy precipice I stand on, and to my right hand, the crag which corresponds to the other! how it plunges down like a waterfall, reaches a level steepness and again plunges! The moon above Fairfield almost at the full now descended over a perilous peat moss, then down a hill of stones, all dark and darkling. I climbed, stone after stone, down a half crag torrent, and came out at the Raise Gap. And, O my God! How did that opposite precipice look in the moonshine, its name Steel Crags!”

A wonderful illustration of the landscape, language and emotion of the sublime.

A tax lawyer by profession and living with a novelist and two cats, Simon Court indulges his passion for history by diving into the Bodleian Library at every opportunity. He has previously written about the English Civil War and has also written a biography of Henry VIII for the ‘History in an Hour’ series. When not immersed in the past he can be found in the here and now, watching Chelsea Football Club.