A thing of beauty is a joy for ever. Beauty, though, is a difficult thing to define, and not a topic on which we all agree. Keats’s Endymion — his 4,000 line poem about a ‘brain-sick shepherd-prince’ who falls in love with the moon goddess, Cynthia — is generally agreed to be a masterpiece of English poetry. But when it first appeared, it was met by a volley of attacks from reviewers (as Wendy Shreve has discussed elsewhere on this blog). John Gibson Lockhart, writing as “Z” in Blackwood’s magazine, turned ire towards ‘the loose, nerveless versification, and Cockney rhymes’ he identified in the poem. And John Wilson Croker, in the Quarterly, complained that the poem ‘wanders from one subject to another, from the association not of ideas but of sounds’ — following rhyme and rhythm instead of narrative sense. 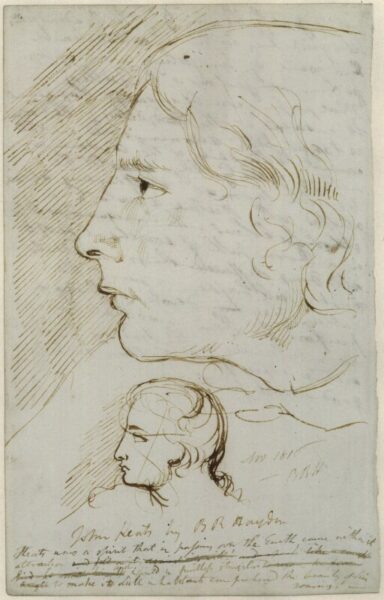 Part of what offended these critics was Keats’s outlandish approach to rhyming couplets. He merrily rhymes ‘angular’ with ‘meteor-star’, ‘chroniclers’ with ‘grief of hers’, and ‘clear-eyed fish’ with ‘or purplish’. These break most rules for precise rhyming, adding stresses to syllables that would prefer not to be stressed (‘purp-lish’), forcing the reader’s pronunciation of words (as when ‘precipice’ rhymes with ‘entice’) or rhyming only one syllable in a word or phrase (‘intoxication’ is rhymed with ‘burst upon’).

The larger problem for Keats’s critics, though, wasn’t the rhyme words themselves, but how the rhymes sat within verse sentences. Keats’s one-time friend Benjamin Bailey would reflect on what he called Endymion’s ‘apparent effort, by breaking up the lines, to get as far as possible in the opposite direction of the Pope school’. What Bailey is getting at is Keats’s tendency to let his sentences overspill the ends of his lines, tugging at the sound and shape of the poem as a whole — an effect that can indeed be illustrated with reference to Bailey’s ‘Pope school’ — or to Alexander Pope himself. Here’s a well-known verse sentence from Pope’s Essay on Criticism:

A little learning is a dangerous thing;
Drink deep, or taste not the Pierian spring:
There shallow draughts intoxicate the brain,
And drinking largely sobers us again. (215–18)

These are exemplary ‘heroic’ couplets. They rhyme perfectly, for one thing, and the units of the sentence occupy the same space as a line, meaning that the punctuation always comes after the rhyme-words. All this happens alongside a steady and precise meter, plus the words illustrate a neatly simple argument: it might be better to know nothing than it is to know about just one thing. Pope’s poetry is celebrated for its ‘balance’ (it wasn’t always as balanced as it might seem, though that’s a different story), an effect that comes from the alignment between sentences and rhymed lines. And now we come to Keats:

A thing of beauty is a joy for ever:
Its loveliness increases; it will never
Pass into nothingness; but still will keep
A bower quiet for us, and a sleep
Full of sweet dreams, and health, and quiet breathing. (I.1-5)

From the beginning, Endymion is a very different beast to what Keats called the ‘rocking horse’ style of Pope’s poetry. The syntax of his sentence-units falls out of sync with the line-endings almost right away, and the meaning of this single verse sentence is comparatively hard to untangle. 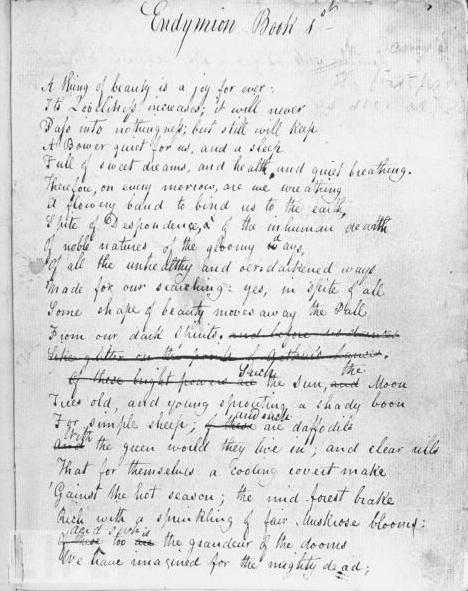 The immediate result of this is that we have to decide, when reading the poem aloud, if we (A) want to thump out the poem in time to the rhymes, or (B) want to opt for a reading that is more like prose. Try these out loud:

A thing of beauty is a joy for ever —
Its loveliness increases; it will never —
Pass into nothingness; but still will keep —
A bower quiet for us, and a sleep —
Full of sweet dreams, and health, and quiet breathing.

A thing of beauty is a joy for ever:
Its loveliness increases;
It will never pass into nothingness;
But still will keep a bower quiet for us,
And a sleep full of sweet dreams,
And health,
And quiet breathing.

Be led by the changes to punctuation and line-spacing, and it should sound pretty obvious how much Keats’s lines run at odds with his sentences. Writing a long poem this way might not matter as much if it doesn’t rhyme — after all, Wordsworth’s blank verse in the Prelude interweaves iambic rhythm with a good deal of run-on (or ‘enjambed’) sentences. But Endymion does rhyme, and the rhymes make it so that we tend to notice the end of each line whether we want to or not. This matters because a reading like ‘A’ makes the poem feel highly wrought, artificial, and — importantly — overtly poetic. ‘B’, read against the meter and the rhymes, feels by distinction much more ‘natural’ — as if the poet is speaking straight to us, rather than chaining together carefully measured and weighed lines of verse.

Of course, few of us are likely to read the poem in either of those exaggerated ways — we’re more likely to plot a course down the middle, and to find a route for ourselves through the poem. But that only emphasizes the effect of Keats’s strange poetic sentences. The rhyme and meter lead us one way, and the sentences lead us another — they beguile and bewilder us to the point that we have to beat our own path forwards, and Endymion is a poem about paths. It begins with Endymion himself walking an ‘uncertain path’ (I.61) through flowery meadows; shortly after, the path diverges:

Paths there were many,
Winding through palmy fen, and rushes fenny,
And ivy banks; all leading pleasantly
To a wide lawn, whence one could only see
Stems thronging all around between the swell
Of turf and slanting branches (I. 79–84) 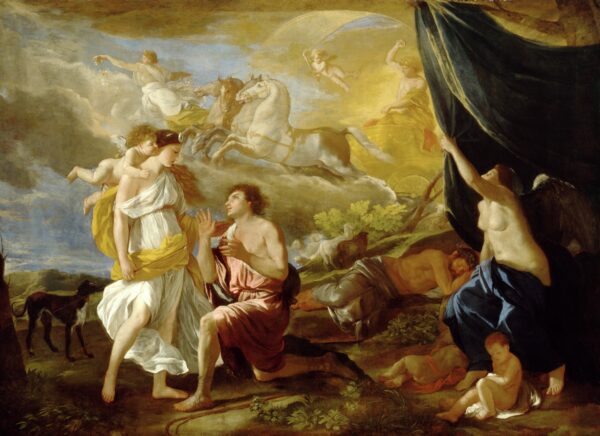 ‘Paths there were many’ — but they all end up in the same place (the ‘wide lawn’). Later in the poem, the god Pan is invoked as one who will, ‘by mysterious enticement draw / Bewildered shepherds to their path again’ (I.268–69). When reading Endymion, we are all such bewildered shepherds, but the poem is kind enough to draw us on, through the contortions of its own rhythms and its untamed sentences, back to its path. It invites us to get lost, ‘pleasantly’, in its own knotty rhythms, and, in this way, the style and structure of the poem influence and shape the sense of its narrative. Where the poem’s early critics complained that Endymion wanders aimlessly from subject to subject, and pulls apart sound and sense, they were identifying precisely the aspects of Endymion that mark it out as a triumph of experimental poetry, as a thing of beauty, and as a joy for ever. 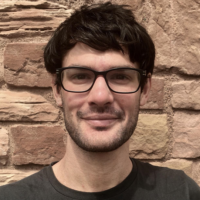 Chris Townsend researches and writes about Romantic poetry. He is especially interested in philosophy and poetic form. He is on Twitter   as @Marmeladrome