‘Love is merely a madness,’ wrote Shakespeare but it was the poets and writers of the later Romantic period who came to love madness to distraction.

Mental disorders, sexual obsession and supernatural mystery were at the beating heart of 19th century literature… and leading the charge was Mary Shelley with her groundbreaking novel Frankenstein.

‘In a fit of enthusiastic madness,’ her eponymous doctor used the ‘unhallowed arts’ to form what he hoped would be a ‘rational creature’ to counteract the human reality that we are all ‘unfashioned creatures, but half made up…  [with] weak and faulty natures.’

And in a novel brimming with the menace of Victorian classics like Wuthering Heights and Jane Eyre, Scottish author Lesley McDowell harnesses the Romantic mania for madness with the fictionalised back story of a troubled real-life friend of Mary Shelley, mysteriously described by the famous author as ‘disturbed in her reason’ when they became reacquainted in 1823. 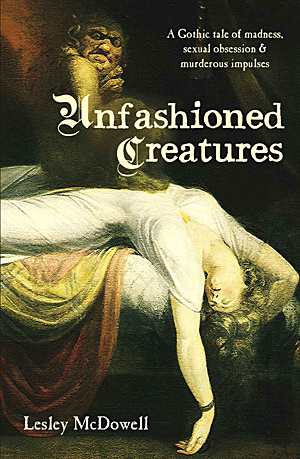 McDowell’s flight of inspired imagination, fuelled by chilling intrigue and powerful notions of identity and gender, sweeps us back to a male-dominated society in which perceived female frailty and mental illness were inextricably linked.

Insanity, superstition, desire, jealousy, ghostly apparitions and forbidden love are the driving forces behind the haunting tale of Isabella Baxter Booth who takes her two young daughters and flees her violent, deranged and epileptic husband in London for the shelter of her childhood home in Scotland.

It is there she meets Alexander Balfour, an ambitious but flawed young ‘mind-doctor’ who will stop at nothing to establish a reputation as a genius in the emerging science of psychiatry and who sees Isabella as his perfect case study.

For years, Isabella has been plagued by the guilt of marrying her dead sister’s husband, David Booth, an eminent scholar who is thirty years older than herself and slowly losing touch with the real world.

He has severe epileptic fits and suffers delusional mood swings during which he is abusive and violent towards his young wife. Hooked on laudanum and fearful for her safety, Isabella leaves their Richmond home to seek refuge with her family north of the border.
She carries with her a note from her husband to take to the asylum in Montrose which she believes is requesting help for his illness but which, in fact, claims his wife has a ‘distressed’ state of mind and needs treatment.

But not only does the ambitious Dr Balfour fall for the charms of Isabella, he also sees in her the key to his greatness as a new ‘psychiatrist.’ Can he prove that a ‘sympathy of the nerves’ could be taken one step further… to ‘the infection of madness’? Isabella, meanwhile, is making her own discoveries. Newly addicted to Alexander’s ‘eager talk,’ ‘springing step’ and ‘casual cruelty,’ she declares that ‘love is a madness that infects us all.’

However, there is betrayal and danger ahead as Isabella’s demons refuse to leave her, Alexander’s torments threaten to overwhelm him and David becomes increasingly disturbed…

There is a seductive method in McDowell’s exploration of early 19th century attitudes to madness. From the outset, she creates a palpable tension between the ‘science’ of madness and the centuries-old ‘artistic’ concept of madness as a literary motif.

‘This is a pretty kind of madness,’ observes Isabella when she is introduced to the ‘perfect microcosm of the world’ at the innovative Montrose Lunatic Asylum where women sew, cook and paint, and men till the soil.

From stark prose and slick dialogue to passages of haunting lyricism, the stylish grandeur of Unfashioned Creatures is as compelling as the ambiguity over where the madness truly lies amidst the dissembling, the drugs and the delusions.

Just how reliable are our two narrators? Is Alexander who, we learn, battles his own family history of insanity, losing his grip on reality, and are Isabella’s ghostly visions merely hallucinations?

McDowell’s characters are extraordinary ‘creations,’ embodying the strange mix of superstition and enlightenment which was so symptomatic of the way that madness – and indeed immorality – was viewed by Victorian society.

‘It’s the old and the new, warring with each other, but the new will win out,’ the scholar David Booth assures Mary Shelley when she once visited his home.

Fact and fiction, reason and madness, order and chaos… nothing is a certainty is this gripping evocation of Gothic grotesquery.
Unfashioned Creatures is published by Saraband.

About Pam Norfolk: Born In Lancaster and educated at Queen Elizabeth School in Kirkby Lonsdale, Cumbria, Pam Norfolk (née Wolfendale) trained as a journalist on a newspaper in Morecambe. For over 30 years, she has worked as a reporter and sub-editor on various evening newspapers as well as a national newspaper, gaining a first-class degree in English along the way and now book reviewing for over 20 North West of England newspapers, including the Lancashire Evening Post. She is married to fellow journalist John Norfolk and has three children and two granddaughters.