by Sarah Doyle
Let’s be honest.  In our weather-obsessed culture, clouds have a fairly poor reputation, both meteorologically and metaphorically.  They blot out the sun, darken our mood, loom over our heads, rain on our parade – and are only tolerated when, we tell ourselves, they have a silver lining.  Most famously, perhaps, Wordsworth “wandered lonely as a cloud”, and that, I am afraid, has rather cemented the cloud’s reputation in popular thinking as something of an unwelcome misery.

So how refreshing – literally – to know that there is a poem that not only celebrates the much-maligned cloud, but gives it a voice with which to celebrate itself: Shelley’s joyful poem, The Cloud.
The poem starts with the line, “I bring fresh showers for the thirsting flowers”, and the fact that it is written in the first person is significant.  This is a personal testimony: the Chronicles of Cumulonimbus, if you will.

The poem continues, “From the seas and the streams;” and immediately places the cloud at the centre of a process that constantly hydrates and rehydrates the earth, making the planet both habitable and beautiful.  Let’s take the first stanza in its entirely; partly to appreciate fully the poem’s glad, self-affirming sentiments, but also to examine its structure:

I bring fresh showers for the thirsting flowers,
From the seas and the streams;
I bear light shade for the leaves when laid
In their noonday dreams.
From my wings are shaken the dews that waken
The sweet buds every one,
When rocked to rest on their mother’s breast,
As she dances about the sun.
I wield the flail of the lashing hail,
And whiten the green plains under,
And then again I dissolve it in rain,
And laugh as I pass in thunder.

The closely-repeated double rhyme in the first line of each quatrain (showers/flowers), combined with the same structure (but with a new rhyme – shade/laid) in the third line, provides a seductive lyrical immediacy which is hard to resist.  The second and fourth lines of each quatrain, which have no internal rhymes but which rhyme with each other (streams/dreams), provide a pleasing punctuation, the end of these shorter lines inviting us to pause and breathe.

This structure is, essentially, a song-form and seems completely perfect for our cloud who should, one feels, be given voice not only to speak, but to sing.  And why should a cloud not “laugh as I pass in thunder”?

The poem has interesting scansion, with varying meter and with line lengths that are erratic, to say the least.  For purists who believe that a formal poem should stick with its meter throughout, this poem may well be frustrating, perhaps even unsuccessful.  And yet, the rhythm of the poem works perfectly.  Again, The Cloud is less a poem than it is a song – with music, rather than meter, being its driving force.  Considered in this context, the poem’s structure is, for me, both satisfying and successful: our cloud, with its nebulous contours and whimsical nature, should not, one feels, be bound by the rigidity of formal meter, but rather be permitted to use a loose ballad form as it wishes.  I can even forgive the poem its varying stanza lengths and occasional inversion of syntax for the sake of the rhyme, so lyrical and harmonious is the overall effect.

As something of a weather-watcher, I revel in the final five lines of the first stanza, which mention sun, hail, rain and thunder in quick, accumulative succession; and in the first line of the next stanza, which proclaims: “I sift the snow on the mountains below”.  Poetry doesn’t get much more meteorological than this.

However, the poem is also deeply metaphysical in its approach, with the cloud taking on magical, almost sprite-like qualities.  The cloud has wings; it sleeps (“still as a brooding dove”); it knows love.

It is definitely not the lonely cloud of Wordsworth’s imaginings, instead interacting playfully and joyfully with nature’s other elements.  For example, the cloud tells us it is ‘piloted’ (energised and guided) by lightning:
Sublime on the towers of my skiey bowers,
Lightning, my pilot, sits;
In a cavern under is fettered the thunder,
It struggles and howls at fits;
….
Wherever he dream, under mountain or stream,
The Spirit he loves remains;
The Sun, that popular enemy of cloud, is, in fact, a welcome consort:
The sanguine Sunrise, with his meteor eyes,
And his burning plumes outspread,
Leaps on the back of my sailing rack,
When the morning star shines dead;
Similarly, the traditionally fickle Moon brings pleasure, companionship and entertainment:
That orbed maiden with white fire laden,
Whom mortals call the Moon,
Glides glimmering o’er my fleece-like floor,
By the midnight breezes strewn;
And wherever the beat of her unseen feet,
Which only the angels hear,
May have broken the woof of my tent’s thin roof,
The stars peep behind her and peer;
And I laugh to see them whirl and flee,
Like a swarm of golden bees,
In its powerful penultimate stanza, the narrating cloud draws our significant spheres – Sun, Moon and Earth – together, emphasising its apparent relationship with all three:
I bind the Sun’s throne with a burning zone,
And the Moon’s with a girdle of pearl;
….
While the moist Earth was laughing below.
The fact that the Moon and the Sun are, of course, vast distances from Earth and from our cloud is irrelevant; the cloud manifests as though it were interacting with these two celestial objects, and that is what is important.  The poem has an internal truth, relying on appearance, not proximity.  There is also a wonderful evocation of a rainbow in this stanza:
The triumphal arch through which I march
With hurricane, fire, and snow,
When the Powers of the air are chained to my chair,
Is the million-coloured bow;
The poem’s final stanza is a triumph, bringing us full circle: we started with rain showers and now, here we are, returned to water.  In a conclusion that is both moving and uplifting, the cloud states:
I am the daughter of Earth and Water,
And the nursling of the Sky;
I pass through the pores of the ocean and shores;
I change, but I cannot die.
For after the rain when with never a stain
The pavilion of Heaven is bare,
And the winds and sunbeams with their convex gleams
Build up the blue dome of air,
I silently laugh at my own cenotaph,
And out of the caverns of rain,
Like a child from the womb, like a ghost from the tomb,
I arise and unbuild it again.
The cycle of a cloud is, the poem assures us, eternal.  Cloud may seem to evaporate, to disappear, but need fear no death or destruction.  Instead, our cloud may “laugh at my own cenotaph”, delighting in the knowledge of its inevitable, almost Christ-like, rebirth:
…. out of the caverns of rain,
Like a child from the womb, like a ghost from the tomb,
I arise and unbuild it again.

And note the use of “unbuild”, rather than ‘build’.  The cloud plays with us one last time, subverting our expectations, reminding us of its capricious spirit and its climatological clout.  It unbuilds the blue skies, as much as the skies build the cloud.  Irrepressible, eccentric, whimsical – that’s our cloud.

Of course, it is entirely possible to read this poem as an allegory, the cloud’s continual renewal being symbolic of the hoped-for afterlife which Christianity and many other religions celebrate.  Equally, the humble yet powerful cloud, with its indomitable nature and its ability to transform a landscape, may be interpreted as a metaphor for the social reform that so interested Shelley.  But for me, the poem works best in its simplest interpretation – an imaginative, magical and metaphysical celebration of a meteorological phenomenon.

So rather than consign a cloud-ridden sky to the weather waste-bin, perhaps we should pause to consider the wonder of “the daughter of Earth and Water, … the nursling of the Sky”.  “Who”, the Cloud might well ask if the mood so took it, “waters Wordsworth’s beloved daffodils in the first place?”
Who, indeed? 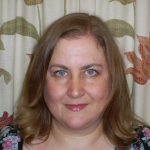 Sarah Doyle is Poet-in-Residence to the Pre-Raphaelite Society, for whom she writes commissioned poetry and co-judges an annual poetry competition.  Her poems have been published in various anthologies and in print journals such as Orbis, Poetry News, Prole and The Dawntreader, as well as in online publications, most recently Wordland 3 and 4  (poetry and prose), Tubeflash (flash fiction), and Sein und Werden.  She is a member of Clockhouse London Writers, as well as two poetry critiquing groups (the Palmers Green Stanza, and Highgate Poets); she co-edited Highgate Poets’ 2012 anthology, Urban Harvest.  Recent competition placings include The Poetry Kit, Poetry on the Lake, Perform Poetry’s Revisited Poetry Competition and Save As Writers’ Shakespeare-themed competition (Prose category).  Sarah reads regularly at poetry events in and around London, and co-hosts Rhyme and Rhythm Jazz-Poetry Club at the Dugdale Theatre in Enfield.