In the footsteps of the Shelleys: Italy

In September 2015 I spent four nights in the bay of Lerici. This visit was my first experience in this part of Italy: the regions of Tuscany and Liguria, an astoundingly beautiful landscape of beaches, mountains and distinctive Italian architecture. I have already been able to spend time in Rome and Venice as a research student, following in the footsteps of Percy Bysshe and Mary Shelley. However, north west Italy really feels like the Shelleys’ home. This is where Percy and Mary spent much of their time from mid-1818 through to the spring of 1822 (just before Percy Shelley’s death on 8 July). In her notes to Percy’s Poetical Works, Mary writes:

The Bay of Spezia is of considerable extent, and divided by a rocky promontory into a larger and smaller one. The town of Lerici is situated on the eastern point, and in the depths of the smaller bay, which bears the name of this town, is the village of San Terenzo. Our house, Casa Magni, was close to this village; the sea came up to the door, a steep hill sheltered it behind.

I stayed in the town of Lerici, which looks over the bay of the same name towards San Terenzo. Our balcony (we hired a wonderful airbnb residence which was reasonably priced and very spacious – highly recommended!) looked out across the bay towards the house which Percy and Mary Shelley lived in: Casa Magni.

A 20-minute walk took us round the bay to the house itself. Mary Shelley said this place had an ‘unimaginable beauty’. 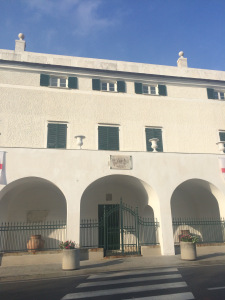 The Shelleys moved here (after living in various other places in Tuscany, including Pisa, Livorno and Bagni di Lucca) in April 1822. Although they only moved here a few months before Percy’s death, the Shelleys were rarely stationed in one place for long, and Casa Magni is important because Percy Shelley moved his family and friends (Edward and Jane Williams) here with a view to set up home. However, biographers of Mary Shelley have implied she was unhappy here, finding it isolated and desolate (she did write: ‘we could scarcely have found ourselves farther from civilisation and comfort’). Casa Magni is a striking white mansion right on the beach, which would have stood alone and remote in the Shelleys’ time, but is now the centre of the strip of buildings in San Terenzo. It is now also a private residence available for hire, somewhere beyond my budget, sadly – but it does sleep up to 10 people, so a future gathering with friends/family there would be wonderful. Miranda Seymour’s research into the Shelleys’ lives suggests it was an intimate dwelling for their crowd, however, as the Williamses and the Shelleys lived ‘in inescapable intimacy, eating in the hall which held their bedrooms narrowly apart’.[1]
Here are some images of Casa Magni as it would have been in the nineteenth century:

This is the plaque on the house now:

The fact that this part of the country is where Percy Shelley also spent his final days makes the experience of being there all the more poignant. Percy set out from this house on the 1 July 1822 in his new boat, the Don Juan. He was travelling to meet Byron and Leigh Hunt at nearby Livorno to discuss The Liberal, a new literary journal. Tragedy struck when on his return voyage the boat sank, drowning all three men on board (Shelley, Edward Williams and Charles Vivian, a young English boatman). Percy Shelley was just 29 years old. Mary – his lover, intellectual collaborator and confidante since their dramatic elopement in 1814 – was anxiously awaiting his return at Casa Magni. Looking out towards that sea and finally piecing together what had happened must have been terrifying for her: and Mary herself was only 24. She later wrote:

The spell snapped; it was all over; an interval of agonising doubt- of days passed in miserable journeys to gain tidings, of hopes that took firmer root even as they were more baseless- was changed to the certainty of death that eclipsed all happiness for the survivors for evermore.

Percy Shelley was cremated on the beach between La Spezia and Livorno, and in March 1823 his ashes were interred at the Protestant Cemetery in Rome. Percy Shelley wrote The Triumph of Life here, and Mary was to later consider that ‘When Shelley was [at sea], he had his papers with him; and much of The Triumph of Life was written as he sailed or weltered on that sea that was soon to engulf him.’
This is why the gulf of Spezia is known as the Golfo di Poeti. The name of Shelley has taken over more things than you might traditionally associate with the literary couple, however….

I  also travelled to Bagni di Lucca, via a mountain drive….

The Shelleys moved to this spa town on 11 June 1818 and rented the Casa Bertini. It was during this residence that Percy wrote the essay ‘On Love’ and translated Plato’s Symposium.

Mountains surround this town. This experience was probably the most beautiful example of isolated Italian landscape I have been lucky enough to see – the lack of the coast (but being conscious of the distant sea, off to the west) and the lush green hills make you feel enclosed in a rapturous space of tranquillity. Bagni di Lucca felt less touristy than Lerici and the other coastal towns; however, an Italian local in the cafe we stopped in was keen to point out that the place was still very populated with English expats.
We set out to try and find the Shelleys’ house. Miranda Seymour explains in her biography of Mary that the house ‘stood beside the oldest of the marble hot baths and the Grand Duke of Tuscany’s disused chapel at the top of a steep and twisted cobbled street.’[2] This was Casa Bertini and it was home to Percy and Mary Shelley, their two children, and Claire Clairmont for two months. Online instructions warned us that ‘Casa Bertini is devilishly difficult to
find’, however, we seemed to wander somewhere that may well have been the right place, reaching an ‘arched entrance’, taking a ‘switchback’ on the left, and up the hill to ‘a small, dead-end piazza’, we found a house.

This now-abandoned house seemed to be in the right kind of place and was the right kind of size. We imagined the Shelleys here, or close to here at least. There was a beautiful view of the River Serchio below from the balcony, and some friendly cats also added to the spectacle!

Other highlights of this brief Shelleyan tour included an experience of the wonderful sunset over the bay and reading Percy’s ‘Lines Written in the Bay of Lerici’ in front of Casa Magni on the beach.

I dare not speak
My thoughts, but thus disturbed and weak
I sat and saw the vessels glide
Over the ocean bright and wide,
Like spirit-winged chariots sent
O’er some serenest element
For ministrations strange and far;
As if to some Elysian star
Sailed for drink to medicine
Such sweet and bitter pain as mine.
And the wind that winged their flight
From the land came fresh and light,
And the scent of wingéd flowers,
And the coolness of the hours
Of dew, and sweet warmth left by day,
Were scattered o’er the twinkling bay.
And the fisher with his lamp
And spear about the low rocks damp
Crept, and struck the fish which came
To worship the delusive flame.
Too happy they, whose pleasure sought
Extinguishes all sense and thought
Of the regret that pleasure [ ]
Destroying   [29-52]

Donald Reiman wrote that ‘what usually inspired PBS to write poetry, it seems, was some unhappy event or unfulfilled desire’.[3] ‘Lines Written in the Bay of Lerici’ is an enchanting example of the dissatisfied poet, world-weary and pensive. This tone might be what many people think of as an example of the stereotypical ‘Romantic’ poem – the disaffected male poet lamenting his thoughts, perhaps in a self-indulgent manner – but the power of Percy Shelley’s poetry is in its understanding of the human condition. Shelley’s voice here calls out to an otherworldly spirit that might seek an affinity with his own sad heart. It is the hope embodied in the gliding vessels, ‘Like spirit-winged chariots’, that the speaker meditates on. It is a more than a declaration of loneliness but rather a mind seeking a kindred soul. By writing this poem, was Shelley not reaching out to the reader? It is the recognisable emotion in this poem that is striking to a reader, rather than a monologue complaining of the narrator’s personal alienation. The fact that the poem is set in a definite place – the beautiful bay of Lerici – captures that human discontent that can still overwhelm in a natural wonderland. The place gives the poem an intimacy and a peculiar link to Shelley himself (and I am glad I have seen boats sweep over the exact same waters), but Shelley’s talent as a poet is that we can imagine feeling the same way ourselves, wherever we are.

[1] Miranda Seymour, Mary Shelley (London: Picador, 2000) p 294.
[2] Seymour, p. 208.
[3] Donald H. Reiman, Headnote to ‘The Aziola’ in The Manuscripts of the Younger Romantics: Percy Bysshe Shelley Vol VIII ed. by Donald H. Reiman and Michael O’Neill (London: Garland, 1997) p. 322.
All quotes from Mary Shelley: ‘Notes on Poems of 1822’ in Shelley: Poetical Works ed. by Thomas Hutchinson (Oxford: Oxford University Press, 1991) pp 675-680.
All photos are the author’s own. Please do not use without permission.
This post originally appeared on https://percyandmaryshelley.wordpress.com/2015/10/13/travel-blog-finding-the-shelleys-in-tuscany-almost-200-years-later/
Anna Mercer is an AHRC-funded PhD candidate at the University of York. Her research is on the collaborative literary relationship of Percy Bysshe Shelley and Mary Shelley. She is also organising a day conference on the work of Percy and Mary Shelley in London in September 2017. For more details click here.