An ephemeral post seems to be a good place to talk about doodles. In their purest form, you may have little idea when you start how either will finish. The youthful Keats’s marginal sketches in his 1815/1816 medical notebook are more purposeful than this but were nevertheless created to fill some unexpected vacuum of time. By any other hand they would be overlooked, however, this medical student was to become a poet, one who relished meaningful imagery. Together these miniature flower portraits appear like hieroglyphs that have yet to been interpreted. That they are so minute adds to their obscurity, the book itself is only 18.5 by 11 cm, while good graphic reproductions can be hard to access. In fact, I only first started thinking seriously about the sketches when I saw the original on display at the Keats House Museum some time ago.

Their instant of creation seems to be a hiatus in the course of a lecture during Keats’s study at the United Hospitals of Guy’s and St Thomas’. Unlike some other parts of Keats’s existing notes this is clearly not a fair copy, but raw notes taken down in the lecture room. Astley Cooper is a probable candidate for the lecturer, a draw for the Hospital’s prospective students, he came to be known as ‘the greatest surgical teacher in Europe’. The lines of Keats’s writing begin to curve as they move down the page around a hand that held the quick-moving pen with an iron grip. Then, mid- sentence, when an alternative manipulation of a dislocated jaw is about to be revealed, the writing stops.

Lectures within a hospital that housed the lecturer’s in-patients may have been liable to this sort of interruption. Keats was left in mid-flow with a pen nib quivering with ink. He may have just tapped the ink back into the inkpot before it dried up while the – no doubt mildly frustrated – students waited for any sign of whether the lecture would continue or not. If this indeed was the state of affairs, he seems to have dissipated his nervous energy by the dispatch of some small sketches.

First, he draws a flower, one that could be seen as having elements of both the ambiguous and the exact. The wild pansy (viola tricolor) is a native flower that is not short of cultural and poetical associations. Among the ragbag of names applied to it are heartsease and love-in-idleness. Traditionally some people have seen two, or sometimes three, faces kissing in the outline of the petals. A poetical book-name was added, sometime in the 1500s, from the French pensée (‘thought’). 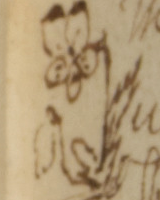 Scientifically, the wild pansy does not conform to a precise description; the markings on the face of its flower being variable within certain parameters. The outline of the distinctive pansy of Keats’s time was still close to the wild type, called by plant breeders ‘horse-faced’ (always popular in gardens, early 19th-century plant breeders were beginning to bring it into the fold of ‘fancy flowers’ by selection and hybridisation, a process that was to eventually lead to the round-flowered, blousy type familiar to us from garden centres and supermarkets).  Ornate and diverse, the wild pansy has the appearance of being purposefully streaked with pigment. Often the upper petals, or ‘ears’, are purple, also spots can occur near the ‘eye’ of the plant around which there can also be radial streaks, or nectar lines as we now know they are.

As in his poetry, Keats could visually recall and characterise a flower without the need of a model. Interestingly, this species’ natural variability means that he can be accurate while at the same time have some license. Within the outline he added precise strokes to represent the top two petals in horizontal half-moon shapes and a splatter of dots around the central ‘eye’. Also, he characteristically captured what might be called the gesture or posture of the whole plant: in this case the wild pansy’s recognisable ‘chin-up’ flower on a high, articulated stem.

Leigh Hunt’s sister-in-law Elizabeth Kent deemed it an impertinence to describe such a familiar plant: as she says in her Flora Domestica of 1823, they could be had at ‘a nursery, or Covent Garden flower-market, six or more may be had for shilling, all of them covered with flowers and buds’. In terms of the purest contemporary scientific culture the pansy’s variability was an irritant; given its garden associations it was in danger of being too close to triviality. In the context of Keats’s formal studies his sketch can be seen as a similar act to drawing a likeness of ZZ Top in your lecture notes; a tremor of release, or even rebelliousness.

However, Keats’s sketch appears to be depicting something very particular, not rocker or punk, more Puck. Shakespeare’s ‘little western flower’ was a wild pansy, the source of functional magic that drives the action in A Midsummer Night’s Dream. Oberon tells of its conception

Yet marked I where the bolt of Cupid fell.
It fell upon a little western flower,
Before milk-white, now purple with love’s wound.
And maidens call it ‘love-in-idleness.’
Fetch me that flower. The herb I showed thee once.
The juice of it on sleeping eyelids laid
Will make or man or woman madly dote
Upon the next live creature that it sees.
Fetch me this herb, and be thou here again
Ere the leviathan can swim a league.

In an age, and a class, which prided itself on exercising a new botanical literacy, authors (including Elizabeth Kent and Leigh Hunt) expressed no doubt in the identity of Shakespeare’s love-in-idleness. The botanical authority William Curtis gave this passage a serious, but also half jocular, justification in his attractive Flora Londinensis, 1777-1798:

Linnaeus remarks [on] the black lines which sometimes appear on the Petals, Milton had observed the same, ‘Pansies sreakt with Jet’. In a poor soil the purple and yellow in the bloom of this flower frequently become very faint, and sometimes fade into a perfect white, this variation in colour gives a propriety to the Metamorphosis of this flower in which Shakespear [sic] pays an elegant compliment to his royal mistress. 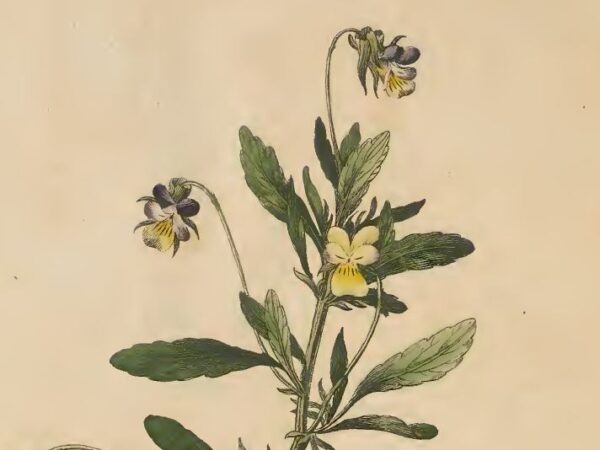 In conjuring up the magic flower, the young Keats tapped into his then parallel literary life, while at the same time pointing to an early mentor. He was to go on to make a passionate study of Shakespeare plays in 1817 when, newly qualified, he had left the prospect of a medical career behind him. But as we learn from Robert White’s Keats as a Reader of Shakespeare (1987), of all the plays we can be sure of his familiarity with A Midsummer Night’s Dream during 1816 through his reading of it with Charles Cowden Clarke, son of the headmaster at his school at Enfield.

Keats’s fellow lodger Henry Stephens had still to devise his blue-black ink, so Keats’s ink was probably purple-black or purple-brown oak gall ink. Away from the study of a painful anatomical correction, with his surplus ink he streaks and splatters the white flower he had outlined, ‘now purple with love’s wound’. Was he playing with Cupid’s blot? Here Keats was – appropriately – enacting Puck’s gesture in marking numerous carefully placed spots with ink/juice on the flower’s face as Puck was to on the eyelids of random mortals;

Through the forest have I gone.
But Athenian found I none,
On whose eyes I might approve
This flower’s force in stirring love.
Night and silence.–Who is here?
Weeds of Athens he doth wear:
This is he, my master said,
Despised the Athenian maid;
And here the maiden, sleeping sound,
On the dank and dirty ground.
Pretty soul! she durst not lie
Near this lack-love, this kill-courtesy.
Churl, upon thy eyes I throw
All the power this charm doth owe.
When thou wakest, let love forbid
Sleep his seat on thy eyelid:
So awake when I am gone;
For I must now to Oberon. 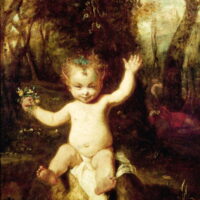 Sketching to the words of Shakespeare, little wonder that Keats could appear distracted at this time. Here is Charles Cowden Clarke’s story of the reply that the student Keats gave when quizzed about his attitudes to his medicinal training:

he expressed his grave doubt if he should go on with it. ‘The other day,’ he said to me ‘During the lecture, there came a sunbeam into the room, and with it a whole troop of creatures floating in the ray; and I was off with them to Oberon and fairy land’.

In this reading, Keats’s sketch is more a flower of the imagination than of the field or garden, holding multiple meanings during process of its creation. But what of the other three flower sketches? Here there are many things to question and consider. Frustratingly, some that can just be discerned in reproduction have a much greater potential interest; some that are a little clearer are difficult to positively identify. Collectively they can appear like a random chord sequence without obvious significance. However, it is possible that there may be a theme to the sequence, even between just two of them, as one completed sketch suggested another. Of course, there is also Keats’s other early reading; remembering that flowers take on several literary masks according to time and place: daffodil, narcissus, narcisse, asphodel. A passage in Keats’s own early work particularly strikes me. In a poem dated November 1815, he addresses an affected poet friend, George Felton Matthew, for criticising his poetry. With an earnestness which, at best, these sketches possess he chides Matthew; ‘For thou wast was once a floweret blooming wild / Close to the source, bright, pure and undefil’d’.

Whichever way this interesting subject may go, this thought-doodle is spent for now – my intellectual ink has run dry.

Gareth Evans writes articles on the history and culture of plants and their use (garethhevans.com). He worked in, and with, botanic gardens for 16 years, specialising in the history of plants and medicine. Recent Highlights include: ‘Seeds of Inspiration’, Linder Memorial Lecture, Beatrix Potter Society, March 2018, and ‘Keats’s Flight from the Vegetable Monster’, a paper at the 4th Bicentennial John Keats Conference 1817.