The Language of Semblance in The Prelude

There are features of Wordsworth’s poetry that are so obvious as to not really need stating; he was obviously concerned with visual perception, and he very clearly had an interest in nature. But sometimes when we let the most obvious parts of poems slip by us, they silently carry with them a wealth of significance that might change how we read the rest of the work. It’s for that reason that it’s not a bad idea to take a close look at Wordsworth’s all-but ubiquitous language of semblance — that is, his frequent use of words like seems and appears.

‘Semblance’ relates to external appearances — especially when the appearance of a thing is different from its reality. But we all use terms of semblance so often and casually that’s it’s not always clear what we mean. If you ask a friend what they think of your boyfriend or girlfriend and they reply “they seem very nice”, you might be satisfied with the response — or you might wonder why they only “seem” nice, as if your friend is really thinking “they seem nice, but…”. The verb ‘to seem’ is a ghostly relative of the verb ‘to be’; the former is about the surface of a thing, the latter gets to its actual nature. And whilst Wordsworth rarely wrote poems about the relative merits or demerits of anyone’s boyfriend or girlfriend, but there are deep philosophical implications to this difference between appearance and reality. Let’s have a look at The Prelude. 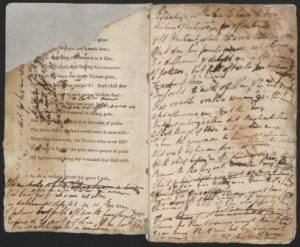 The 1805 version of Wordsworth’s Prelude opens with the following image of an ‘intellectual breeze’:

Oh, there is blessing in this gentle breeze,
That blows from the green fields and from the clouds
And from the sky; it beats against my cheek,
And seems half conscious of the joy it gives. (I.1-4)

The poem, which is many thousands of lines in length, begins with what can only be viewed as a tentative claim about the nature of Nature: the breeze only ‘seems’ conscious, and only half-conscious, at that. True enough, the opening lines do feature the verb ‘to be’ — there is blessing in the breeze — but it is not clear who put it there, nor if the breeze really knows about it. Is this a poem about human consciousness, a natural-spiritual consciousness, or half-and-half?

Following the many instances of this kind of language, you can quickly detect two patterns in The Prelude. One is that terms of semblance often accompany doublings, dichotomies, and things that come in halves. Consider the following (with italics added by me):

I seem
Two consciousnesses, conscious of myself
And of some other Being (II.31-33)

things remembered idly do half seem
The work of fancy (VII.148)

The other discernible pattern is that Wordsworth’s language of semblance tends to pop up in those moments in The Prelude when nature is (or seems) most spiritualized or active. Here’s the famous image of a cliff bearing down on the young Wordsworth as he rows on a lake at night:

When from behind that craggy Steep, till then
The bound of the horizon, a huge Cliff,
As if with voluntary power instinct,
Uprear’d its head. (I.408-411).

As if with voluntary power. But not actually? Nature again and again gets this treatment in The Prelude, with the poet writing: ‘Upon this lustre have I gazed, that seemed / To have some meaning which I could not find’ (VIII.576-577); ‘in life’s everyday appearances / I seemed about this period to have sight / Of a new world’ (XII.369-372); and ‘the sky seem’d not a sky / Of earth, and with what motion mov’d the clouds!’ (I.351-323). What motion, indeed?

This language, of seemingness and appearance, ultimately plays a crucial role in Wordsworth’s philosophic vision. He won’t confirm for us whether he is merely seeing the world as a spiritualized entity, or whether it really is that way. It’s the difference between subjective and objective truth, and Wordsworth’s uncertain language plots a course somewhere between the two. We can’t apply the hard and fast categories of philosophy to Wordsworth — such as Materialism, Idealism, Realism — because he by turns looks to occupy all those positions, and none. Put differently, it would be difficult to say for sure whether Wordsworth thinks the whole world is in his head, or if it exists ‘out there’ — and if there were no humans left to observe it, whether the world would carry on being half-conscious of the joy it gives.

A last example can be found in the concluding sections of The Prelude, which deal directly with the question of the relation between mind and world. Wordsworth flags up the theme of uncertainty early in the thirteenth book of the poem, during a climb up Mount Snowdon. A ‘huge sea of mist’ parts at the top of the mountain, and he gains a view of ‘the sea, the real sea, that seemed / To dwindle and give up its majesty’ (XIII.49-50). This is a much-discussed pair of images, as Wordsworth goes from a common metaphor (‘sea of mist’) to a literal image of the ocean one. And yet, Even that ‘real sea’ is awash with semblance, seeming to ‘dwindle’, to appear somehow smaller, in the eye of the poet.

View of Mount Snowdon from Llyn Nantlle, by Richard Wilson

The passage atop Snowdon then gives way to the climactic episode of the book, the experience of the poetic imagination:

A meditation rose in me that night
Upon the lonely mountain when the scene
Had passed away, and it appeared to me
The perfect image of a mighty mind,
Of one that feeds upon infinity,
That is exalted by an under-presence,
The sense of God, or whatsoe’er is dim
Or vast in its own being (XIII.66-73)

If it’s hard to tell what’s going on here, it’s because Wordsworth in part wants to keep it that way (there isn’t actually a full-stop for another 10 lines after this, it just keeps going). He sees the image of his own mind, which is imbued with a ‘sense of God’. ‘Sense’ is a complicated word in itself, as Wordsworth could mean it in its technical deployment as a bodily or mental function — as in ‘the sense of smell’ — or as only a faint, intuited knowledge of something — ‘sensing his presence’. More difficult still is the pairing ‘it appeared’. ‘Appeared’ might mean ‘it looked like’, or else ‘it really made itself visible before me’ — the difference between ‘it seems like a mind’ or ‘a mind appeared’. That’s confusing enough before even asking what ‘it’ refers to. There’s a tendency to read ‘it’ as what we call a pleonastic pronoun — as in the phrase ‘it rained’. But maybe ‘it’ looks forward: ‘the perfect image of a mighty mind appeared to me’. Or maybe ‘it’ looks back to the previous lines: ‘A meditation rose and appeared like a mind’, or ‘the lonely mountain appeared to me as a mind’, or even ‘the scene, after it had passed, (somehow) appeared to me as a mighty mind’. Where we’d hope for answers from the poem, though, we find none.

The job of a poet, after all, relates more to offering perspectives than it does to providing hard and fast answers, and The Prelude artfully manages to give us several pictures of reality at once; images of ‘the real sea’ relate to the scientist’s view of the world, as out there, real, and indifferent to us. The spiritualized vision of a natural world that interacts with the human mind is, for Wordsworth, the most tantalizing view of things. And there is also the possibility of solipsism in Wordsworth — of a mind that only sees the world as a collection of its own thoughts. Keats famously referred to this aspect of Wordsworth as the ‘egotistical sublime’ — as the mind that encounters the natural world, but only seems to see itself. Such an experience is, though, only one facet of Wordsworth’s poetry, and across his most philosophic poetry he uses semblance, and uncertainty, to leave the options open for his reader. In closing, here are the opening lines of his great ode, ‘Intimations of Immortality from Recollections of Early Childhood’:

There was a time when meadow, grove, and stream,
The earth, and every common sight,
To me did seem
Apparelled in celestial light,
The glory and the freshness of a dream.

At the centre of these opening lines is the word ‘seem’. And the uncertainty of semblance is here reinforced through the emphatic movement of the poem’s rhymes: from stream, to seem, to dream. A natural image, the dreaming mind that produces its own images, and, in the middle, the experience of a world ‘seeming’ to be, which holds both nature and mind together. It is masterful.

Chris Townsend is a Ph.D. candidate in English literature at the University of Cambridge. He works on the philosopher George Berkeley and his influence on the Romantic-era poets William Blake,

Samuel Taylor Coleridge, and William Wordsworth. Outside of academia, he writes about literature, art, and popular culture, and he also blogs about professional cycling. His Twitter ID is @marmeladrome