The ‘Rock of Names’

Behind and above the Museum at William Wordsworth’s Grasmere home, Dove Cottage, we find the celebrated, perhaps even infamous, Rock of Names, also known as ‘Sara’s Rock’. This reconstructed slab of a Lakeland volcanic outcrop used to be found, in situ, around half-way between the homes of the Wordsworths in Grasmere and that of Samuel Taylor Coleridge, who lived for a time in Keswick., This small rocky outcrop above the eastern lake shore of Thirlmere, alongside the old turnpike road, marked a not infrequent meeting place for the friends, and is marked by their initials:

Painting of the Rock by Harry Goodwin. Courtesy of the Trustees of Dove Cottage.

So how did this slab of roadside rock come into being?

It’s possible the carving took place over a period of time, starting in 1802. On May 4th 1802, Dorothy noted, ‘We parted from Coleridge at Sara’s Crag after having looked at the Letters which C. carved in the morning. I kissed them all. Wm deepened the T with C.’s penknife.’ Around the same time Coleridge himself wrote ‘Cut out my name & Dorothy’s over the S.H. at Sara’s Rock.’

In other words, the first initials to be cut were those of Sara Hutchinson and were the work of Coleridge. Sara was his unrequited love and he inscribed her initials just as people have done on trees for hundreds of years. It also explains why the group always called the crag ‘Sara’s Crag’ or ‘Sara’s Rock’ – it only started to be referred to as the Rock of Names later in the nineteenth century. The friends had already carved their names before: in April 1801 William wrote to his future wife, Mary Hutchinson, ‘You will recollect that there is a gate just across the road, directly opposite the fir grove; this gate was always a favourite station of ours; we love it far more now on Sara’s account. You know that it commands a beautiful prospect; Sara carved her cypher upon one of the bars, and we call it her gate. We will find out another place for your cypher, but you must come and fix upon the place yourself. How we long to see you, my dear Mary.’

Canon Hardwicke Rawnsley, a founder of the Wordsworth Society, discussed the Rock in his Literary Associations of the English Lakes of 1894. He noted how hard the volcanic rock was, and commented, “For they were all poets who wrought their initials painfully upon the hard volcanic ash, and graved upon the rock’s smooth breast ‘letters / That once seemed only to express/ Love that was love in idleness’ (the lines are a reference to Wordsworth’s poem ‘The Waggoner’).

Dorothy’s journal has several references to the Rock, and as already noted, William referred to it in his original draft of ‘The Waggoner’:

We worked until the Initials took
Shapes that defied a scornful look. –
Long as for us a genial feeling
Survives, or one in need of healing,
The power, dear Rock, around thee cast,
Thy monumental power, shall last
For Me and Mine! O thought of pain,
That would impair it or profane!
Take all in kindness then, as said
With a staid heart but playful head;
And fail not thou, loved Rock! to keep
Thy charge when we are laid asleep.

Wordsworth recognised that the initials would still remain when he had departed the earth. And they survived thus for the following half-century, protected only by the slow growth of algae, lichens and moss, which as Professor William Knight noted in his The English Lake District as interpreted in the poems of Wordsworth (1878), “secured it from observation, even from the highway.”

However, in the mid-1870s, the city of Manchester drew up plans for a new reservoir at Thirlmere, and a bill was put before parliament. There were several objections to the plan, however, notably from Wordsworth’s son, William, who argued that new reservoir would literally submerge the Rock of Names. However, Cumbrian author John Wilson argued that the carvings weren’t the work of the poets at all, but rather of an eccentric local called John Longmire, whose hobby was stonecutting.

There were certainly similarities between the carvings on the Rock and known examples of Longmire’s work, and one plausible theory is that Longmire augmented and deepened the original carvings, perhaps adding a more ‘professional’ Roman lettered finish. 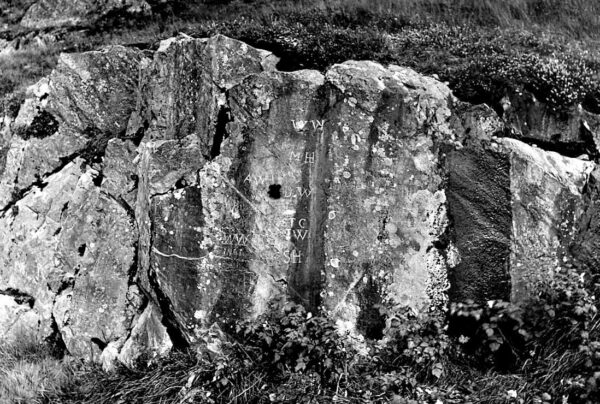 Herbert Bell’s photograph of the rock and lettering c1880. Courtesy of the Armitt Library Trustees.

What happened to the rock when Manchester constructed Thirlmere reservoir?

The Manchester Corporation Act was passed in 1879, and the Manchester Water Works committee eventually started construction of the Thirlmere dam in 1890. By this time Canon Rawnsley and his wife were at the heart of the campaign to stop Manchester from destroying the Rock.

Picture of the Thirlmere dam opening ceremony with Canon Rawnsley, who said the prayers, on the extreme left hand side. Picture courtesy of United Utilities.

Nor were the Rawnsleys the only people involved: there had been huge public interest during the parliamentary debate about the Thirlmere scheme, and people were now aware of the Rock’s existence as they had never been before. As a result, Manchester City Council reluctantly gave permission to the Cockermouth-based Wordsworth Institute to remove the rock. As Alderman Harwood wrote, “The fragments containing the initials were preserved, and have been built into a cairn on the solid base of mountain stone, at a point above the new road diversion, in a line with the rock from which they were taken. This was carried out by persons in the neighbourhood.” The local ‘persons’ in question included the Rawnsleys. As the Canon later noted, “The cairn, carefully built, contains only the fragments of certain letters, which are all that we are able to save from the cruel blasting powder of the contractors who wished to quarry the “Rock of Names” for material to make the water-dam.”

The photograph confirms that only parts of the lettering to have survived intact.

How did the rock fragments leave Thirlmere and come to Grasmere and to be ‘reassembled’ behind the Museum?

In 1984 the cairn’s fragments were ‘spirited’ away to Grasmere. This was a combined effort by the then chairman of the Wordsworth Trust, Jonathan Wordsworth, and Lakeland hotelier Michael Berry, who funded the operation. He told the BBC in 1984 that he’d been inspired to ‘save’ the Rock by reading about it in Dorothy’s Journals. The removal took place with the agreement of the North West Water Authority, who by then owned the Thirlmere site. The fragments were restored and reassembled on a wall above the Wordsworth Trust museum.

What do we see today?

The question which must now be asked is how much of the Rock we see today was actually the work of Wordsworth and Coleridge? Can the panel above Dove Cottage really be the fragments blasted by dynamite by Manchester’s contractors?

The work of breaking up Rawnsley’s cairn was attended by the press and a BBC North-West film team. It shows the contractor using a crowbar and lump hammer to break up the cairn. The fragments were then taken to a stonemasons in Bowness, where the blocks containing the initials were cut into two-inch pieces, laid out in their original order and bonded into one piece. The whole face was then sand-blasted to obtain the uniform appearance we see on site in Grasmere. 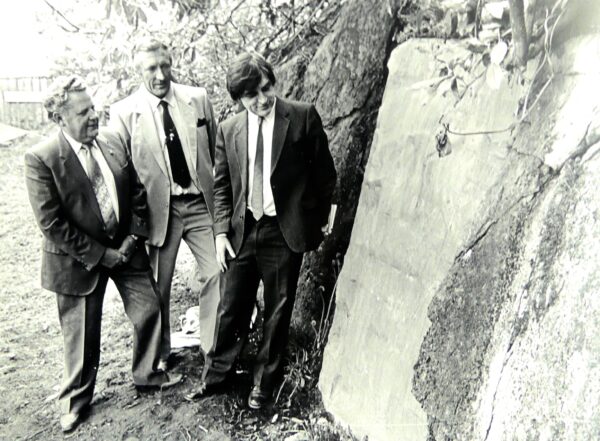 All that remains on the original site, just above the A591 at Thirlmere, is a plaque placed close to where the Rock of Names and the ‘cairn’ used to stand. This is at Grid Reference NY320153.

Perhaps the BBC chose a most appropriate title for their 1984 film about the restoration of the Rock: ‘A Marvellous Piece of Illogical English History’. Whatever the current shape and form of Sara’s Rock we see toda,y it seems William’s wish is being met:

And fail not thou, loved Rock! to keep
Thy charge when we are laid asleep.