Oh for the crags that are wild and majestic,
The steep frowning glories of dark Lochnagar
Lachin y Gair, Lord Byron, 1807

Lochnagar is a peak in the Grampian Mountains, now part of the Royal Estate of Balmoral. George Gordon Byron was raised in nearby Aberdeen in his early years. When he was eight years old, his mother took him up into the mountains as he recovered from a bout of scarlet fever. His poem is in part a nostalgic nod to what is evidently a vivid childhood memory, comparing the ‘wild and majestic’ Lochnagar to rather more modest delights elsewhere (“England! Thy beauties are tame and domestic”). 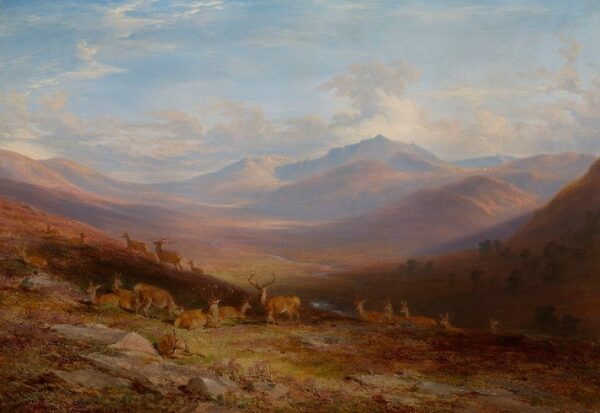 A view of Lochnagar by James Giles (1801-70), 1848, Royal Collection Trust Her Majesty Queen Elizabeth II 2019. Queen Victoria gave this painting to Prince Albert as a Christmas present in 1848.

It is from this that we have taken the title of our exhibition Wild and Majestic: Romantic Visions of Scotland (26 June to 10 November 2019 at the National Museum of Scotland), which examines, among other things, the role which Romanticism played in shaping perceptions and popular symbols of Scotland in the 18th and 19th centuries. Here the team behind the exhibition introduce some of the themes and most significant objects.

Byron alludes in Lachin y Gair to his Jacobite forebears, the Gordons, and our exhibition starts with the aftermath of the defeat of the Jacobites at Culloden in 1746. 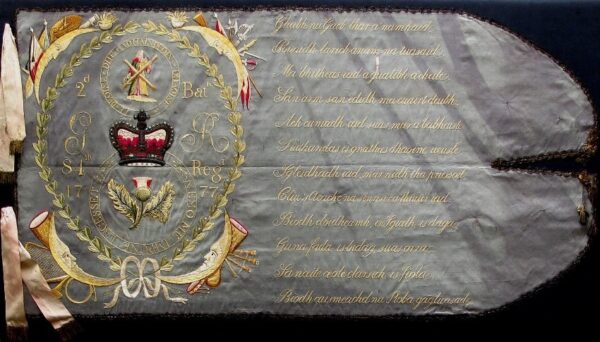 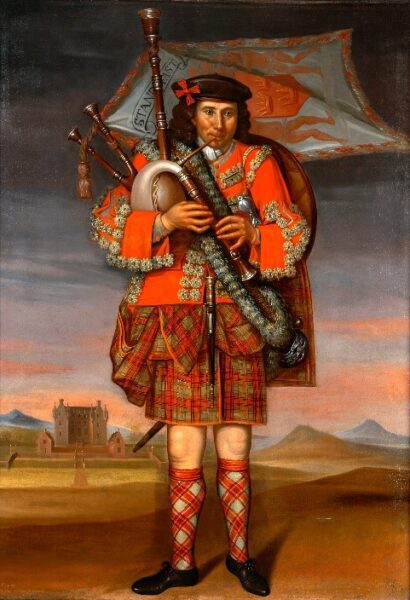 At that point in Scotland’s history, it is fair to speak of a Highland culture in crisis. Partly as retribution and partly to mitigate against further rebellion, a series of laws were imposed which were designed to accelerate the dismantling of traditional clan structures. These included the Dress Act, which restricted the wearing of Highland dress by men and boys in Scotland. It did not apply to women, to Scottish elites, nor to soldiers serving in the British army and, before long, the distinctive figure of the kilted Highland soldier would come to be celebrated, particularly in campaigns against Napoleon.

There was a hugely significant parallel cultural development with the publication of fragments of the epic poetry of Ossian, a legendary 3rd century Gaelic bard, which introduced the history and customs of the Scottish Highlands to an international audience. The Highland schoolmaster and poet, James Macpherson, claimed to have researched and collected ancient tales in the Gaelic language and translated them into English. Some questioned the authenticity of his work, but there is good evidence to suggest that Macpherson did consult original source material before adding some flourishes of his own in the translation. 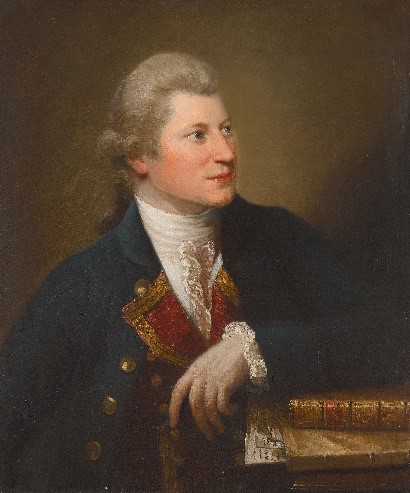 These sources included The Red Book of Clanranald, which is on display in the exhibition. 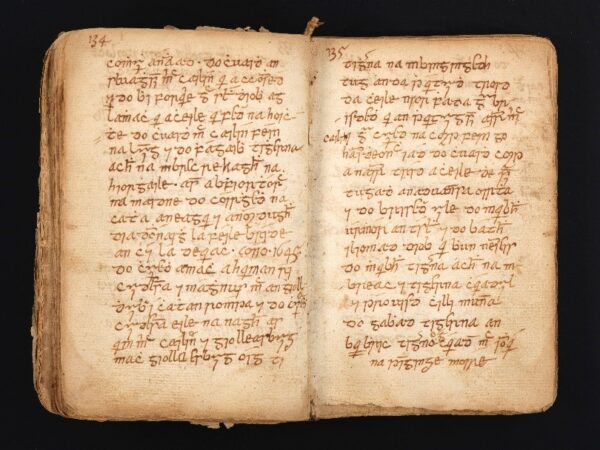 Red Book of Clanranald, written in Gaelic by the MacVurichs, bards of Clanranald in the 17-18th centuries, containing poems and traditional genealogy and history of the Macdonalds

Whatever the truth of it, Macpherson’s Ossian took the literary world by storm. It was translated into multiple languages and was admired by many influential European writers, artists and composers. The Ossian sensation was an early landmark in European Romanticism and marked Scotland out as a place that people, and artists in particular, were curious to see. Early ‘tourists’ in this vein included Robert Burns, who was interested in piping and traditional verse, and whose poetry was inspired by his experiences travelling across the Highlands. His publisher later commissioned Beethoven to compose a score for his work Highland Harry: the original score of which is on display in the exhibition. 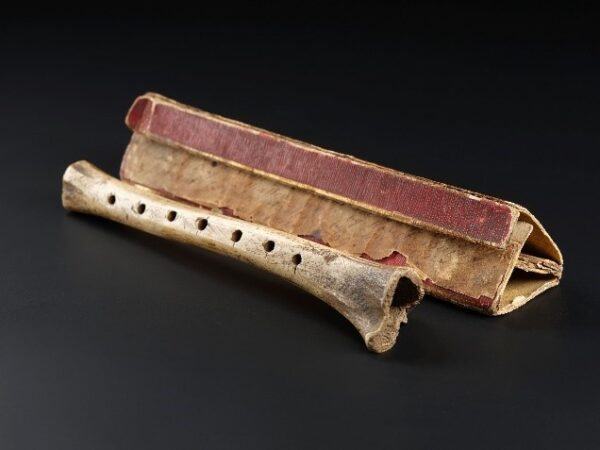 Bone chanter of the Stock-and-Horn in as described by the owner Robert Burns in a letter to music editor and publisher, George Thomson, 19 Nov 1794

While the Highland landscape was an alluring destination for many, its population was experiencing a period of fundamental change and uncertainty. As Scotland underwent a dramatic social and economic transformation in the post-Jacobite era, some people came to realise what was in danger of being lost. Across Britain, societies were formed which sought to collect and preserve what they regarded as endangered elements of Highland culture. The Highland Society of London, founded in 1778, successfully lobbied Parliament to repeal the ban on Highland dress, established standards for the manufacture and playing of the Great Highland Bagpipe as we know it today, and, in 1815, began a campaign to document different ‘clan’ tartans. 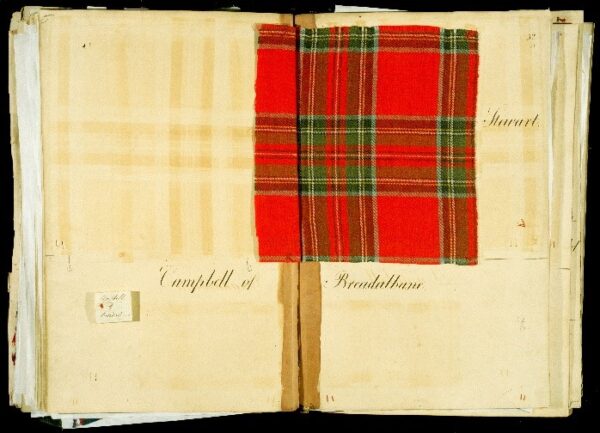 Ledgers of tartan samples formed by the Highland Society of London, c. 1820 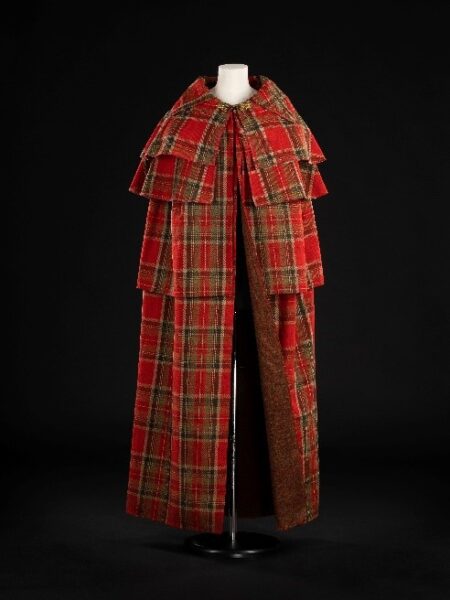 Woman’s cape in wool tartan, red with a broad green and white overstripe, high round neckline with a large fold-down collar c1810

They also celebrated the achievements of Highland regiments by commissioning commemorative medals and awarding an elaborate trophy to the Black Watch for their services in Egypt in 1801. 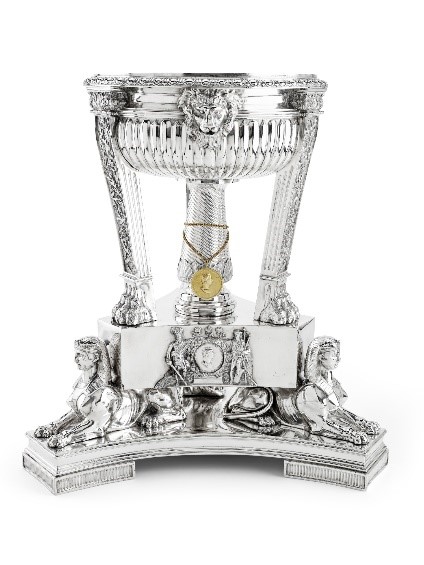 However, there is irony in the fact that many of the Society members committed to ‘saving’ Highland culture were the same landlords who were proactively clearing people from their estates to make way for profitable sheep farms.

From the late 18th century, Romantic inclinations drew visitors to Scotland in increasing numbers, especially attracted to locations depicted in romantic paintings, prints and literature. Writers, artists and musicians embarked on personal pilgrimages, inspired by the lasting influence of Macpherson’s Ossian, the fame of Robert Burns, and the epic poems and historical novels of Sir Walter Scott. Works by major figures, including Wordsworth, Turner and Mendelssohn inspired more people to seek out the places evoked in music, art and literature for themselves, contributing to the growth of the Scottish tourism industry. 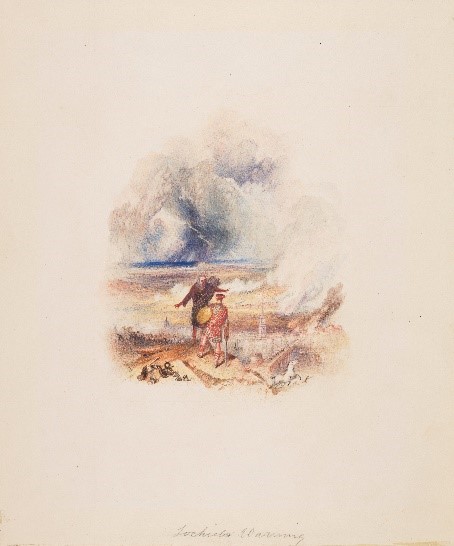 The exhibition reflects this popular fascination with the Highland landscape and its history through the display of several star objects, such as Mendelssohn’s original manuscript score of the Hebrides Overture, on loan from the Bodleian Library. 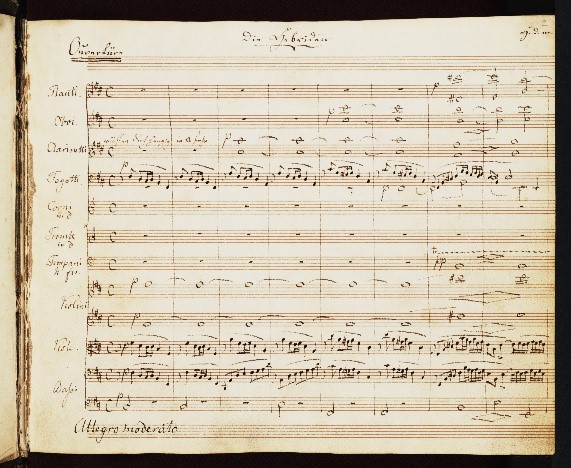 It is often suggested that overture was inspired by Mendelssohn’s trip to Fingal’s Cave on the island of Staffa. In fact, he composed the music before that trip, being ‘extraordinarily affected’ by the sights on his journey from Fort William to Mull. We also a travel journal and two sketchbooks belonging to Dorothy Wordsworth and her niece Dora, on loan from the Wordsworth Trust . 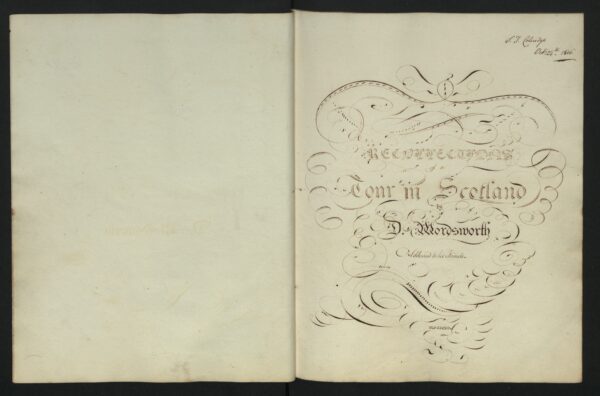 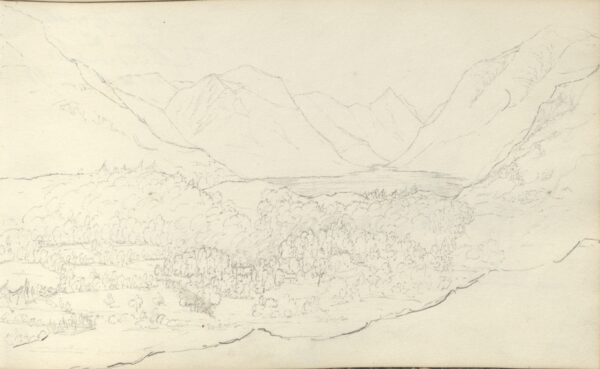 These individuals, and indeed most other luminaries of the time, made a point of calling on Sir Walter Scott on their journey towards the Highlands, visiting the author at his Abbotsford estate in the Scottish Borders. A silver urn gifted to Scott by Lord Byron, on loan from the Abbotsford Trust, reflects the friendship between these two literary titans of the Romantic era and the esteem with which Scott was regarded by his contemporaries. 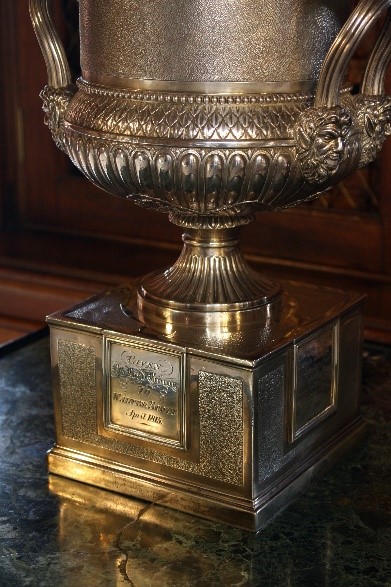 A silver urn gifted to Scott by Lord Byron in 1815, on loan from the Abbotsford Trust

When Byron wrote about Lochnagar in 1807, there was no ‘Royal Estate’ there. In fact, it would be another 15 years before a reigning British monarch would set foot in Scotland. When George IV came to Edinburgh in August 1822, it was the first Royal visit to Scotland since Charles II’s coronation in 1651. This was a pivotal event, and Scott was one of its principal authors. Like many of the events and developments covered by the exhibition, the politics of the visit were controversial at the time, and remain so now. 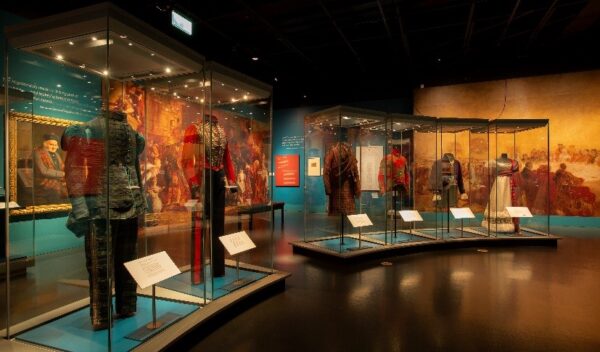 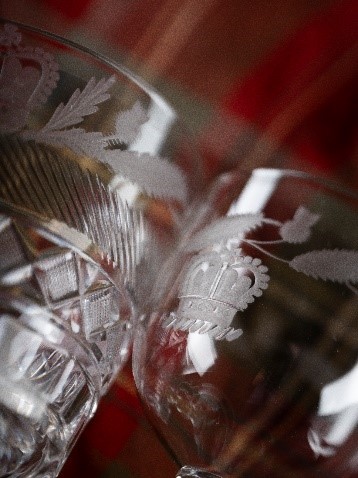 Scott and his friend Colonel David Stewart of Garth were tasked with preparing Edinburgh and its citizens for the visit, which saw a programme of patriotic events demonstrating Scotland’s loyalty to the British royal family while asserting that Scotland retained a distinct national character within the Union. However, critics complained that a romanticised ideal of Highland history had been imposed upon the whole of Scotland. Lowlanders donned Highland dress for the first time, whilst relatively few heads of Highland families deigned to attend. For all the criticism, however, the abiding memory of the visit for many was the appearance of the King himself wearing Highland dress, being greeted by a tartan-wearing population. 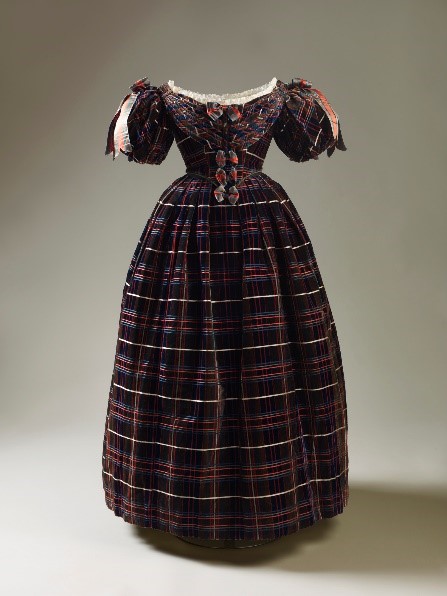 The young Queen Victoria was among those captivated by the Romantic idea of Scotland, prompted by her first reading of The Bride of Lammermore in 1836. Her interest was encouraged by her husband Prince Albert, who had grown up in a German aristocratic society that was itself steeped in Romantic attitudes towards landscape, history and hunting. Both were avid readers of the poems and novels of Sir Walter Scott, and admired the paintings of artists such as Edwin Landseer. 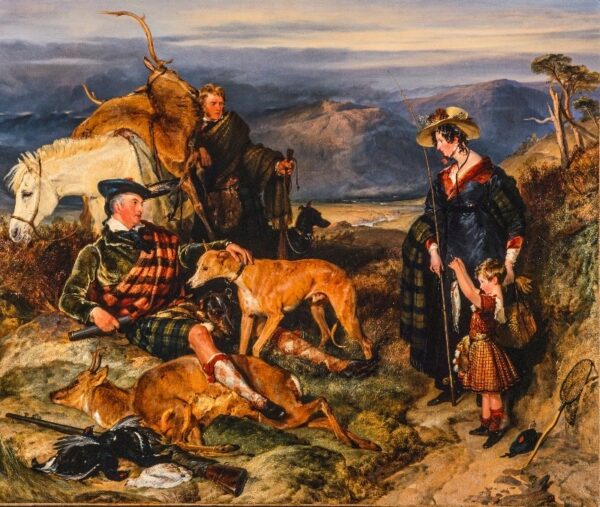 Edwin Landseer, Scene in the Highlands with portraits of the Duchess of Bedford, Duke of Gordon and Lord Alexander Russell, 1825-8

In 1842, the royal couple visited Scotland for the first time. The grand reception that was arranged for them at Taymouth Castle mixed Highland Romanticism with a strong medieval theme, convincing Victoria and Albert that they had discovered a magical kingdom within their own realm. Further tours followed, and in 1848 Queen Victoria and Prince Albert leased the Balmoral sporting estate on the upper River Dee in the Aberdeenshire Highlands, a part of the country where the population had declined through emigration and where Gaelic was still widely spoken. The couple bought the property four years later and embarked on rebuilding Balmoral Castle as their ideal Highland home. The new Balmoral was a grand homage to the Romantic vision of Scotland, with fashionable Gothic touches. Thistle motifs were incorporated into the wallpapers and tableware, while tartan was used in abundance in the carpets, curtains and upholstery. The royal family’s annual Balmoral visits were taken up with outdoor excursions through the surrounding mountains, Lochnagar and all, attended by servants and estate workers. While Queen Victoria made sketches and paintings, Prince Albert hunted deer, attempted to learn Gaelic, and planned improvements to the estate. 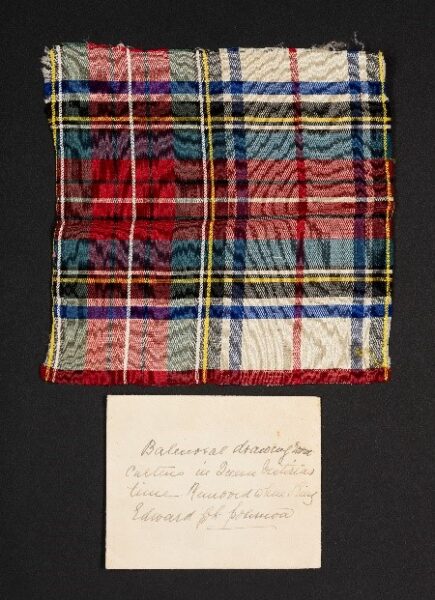 Envelope containing a piece of silk fabric in Dress Stewart tartan, from the curtains in the drawing room of Balmoral Castle, Aberdeenshire 1850 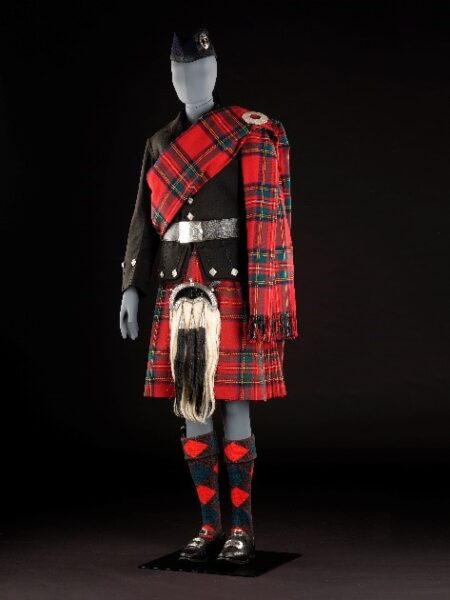 Suit of highland dress with Royal Stewart Tartan, uniform of the Balmoral Highlanders 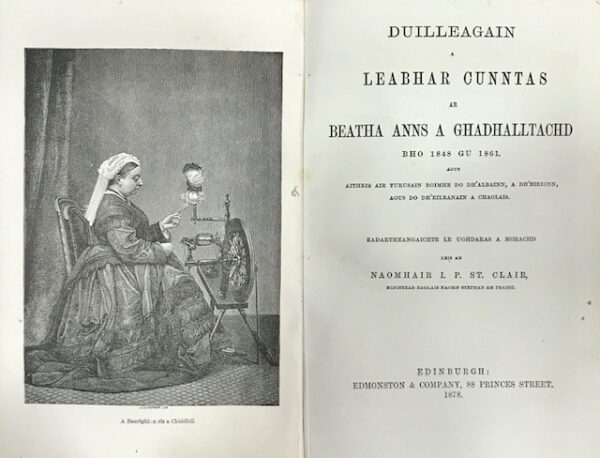 In 1861, Prince Albert died unexpectedly. For the remainder of her reign, Victoria insisted that life on the Balmoral estate be ritualistically preserved as Albert had known it.  The Queen’s attachment to her personal ideal of the Highlands gave a new lease of life to tourism based upon nostalgia and sentiment about the true nature of Scotland. The Balmoral formula of Highland dress, outdoor life, piping and Highland games imposed a lasting structure on popular ideas about Scottish traditions.

Years have roll’d on, Loch na Garr, since I left you,
Years must elapse, ere I tread you again. 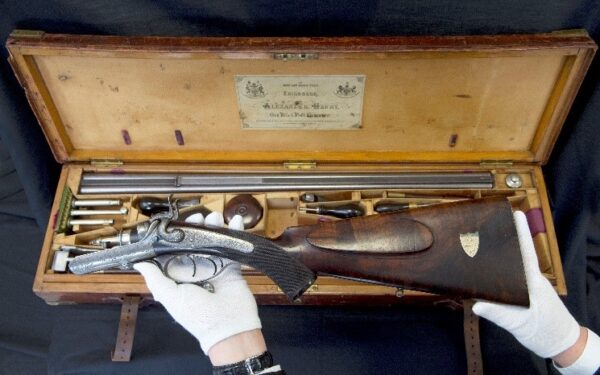 Sporting double rifle by Alexander Henry presented by Queen Victoria to her Highland Servant John Brown, as a Christmas gift in 1873

Wild and Majestic: Romantic Visions of Scotland is on at the National Museum of Scotland in Edinburgh until 10 November 2019. An accompanying book of the same name, published by National Museums Scotland Enterprises is on sale now. The exhibition is supported by Baillie Gifford Investment Managers