An Afternoon with Dorothy Wordsworth

On the afternoon of 18th May, Senior Hospice Nurse Lilian Simmonds addressed a group gathered opposite Dove Cottage and asked us to ponder the question: ‘Why should we read Dorothy Wordsworth?’  So began an afternoon that would take us on a journey in Dorothy Wordsworth’s footsteps, walking across a landscape that she knew intimately, and listening to her words as they were written down in her journals.

These words were to be at the centre of the afternoon, which was split into two dialogic halves; after Lilian had invited us to encounter Dorothy’s story through her own walking and writing, Canadian novelist and short-story writer, Kathleen Winter, spoke to us in fascinating detail about her current project transcribing Dorothy’s later journals. Storytelling was at the heart of both Lilian’s and Kathleen’s approach to Dorothy Wordsworth, as they allowed the story of this remarkable woman’s life to unfold through her own written words but also told their own stories of reading Dorothy’s journals and the impact this has made on their lives. During our walk, Lilian shared with us how encountering Dorothy’s writing has influenced her work as a Senior Hospice Nurse, speaking about the life-changing benefits of journal keeping and the ways in which Dorothy teaches us to slow down and reorient our perspective on the world. 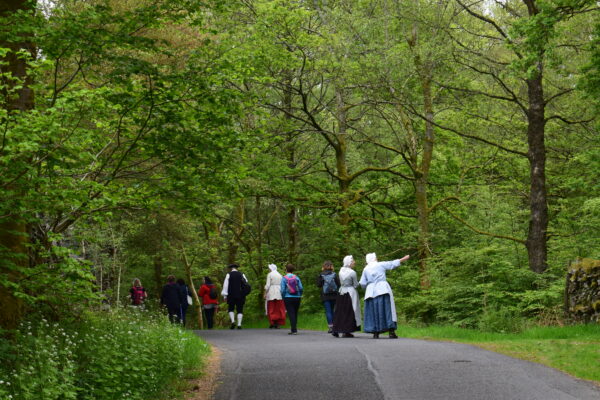 We began the walk outside Dove Cottage, where Lilian introduced us to Dorothy’s life in Grasmere and invited us to enter in to her world of walking and writing. This was the first of five stations that were built into the walk, five places of importance to Dorothy, where we paused and responded to her words as Lilian shared carefully chosen extracts from the Grasmere Journal and encouraged us to reflect on their relevance to our own lives. We were given five postcards at the beginning of the walk and at each station asked to write down thoughts in response to a question or prompt. At Dove Cottage we considered Dorothy’s deep connection to a sense of place, before heading up the road to the Wishing Gate and John’s Grove, where we thought about her incredible imagination. Lilian directed us to think about how we make connections – both to each other and to the landscape – as she explained how the Wordsworths named special places in Grasmere after their family and friends. As we wandered down through the woodland of White Moss to the lake shore, those I walked with shared personal stories of naming places or objects in the landscape that are meaningful in their own family circles, and I was reminded again of the power that storytelling has to bring people together.

On the banks of the River Rothay as it wends between Rydal Water and Grasmere Lake, Lilian spoke to us about William and Dorothy’s relationship and how Dorothy’s connection to the natural world and the resonant way in which she wrote about it inspired William’s poetry. She talked sensitively about the way in which William and Dorothy’s relationship changed after his marriage to Mary and the impact that losing the person who leads and guides you can have on your well-being, and we thought about where we find meaning and purpose in our own lives. We followed the river back to the shore of Grasmere Lake and stopped in a rare moment of sunlight as the clouds that had threatened rain allowed flashes of blue to be seen. Having already helped us develop the practice of walking and pausing along the way, at the lakeside, Lilian explored the ways in which Dorothy teaches us to slow down. She showed us how Dorothy’s walking weaves its way throughout the Grasmere Journal and shares space with stopping and sitting still, opening the gaze up to see the minute things of nature as well as its vistas. Walking, Lilian suggested, connects us to slowness in powerful ways; drawing on Rebecca Solnit’s ideas about wandering, she offered to us the idea that walking enables us to live in the whole world and not just a series of interiors. 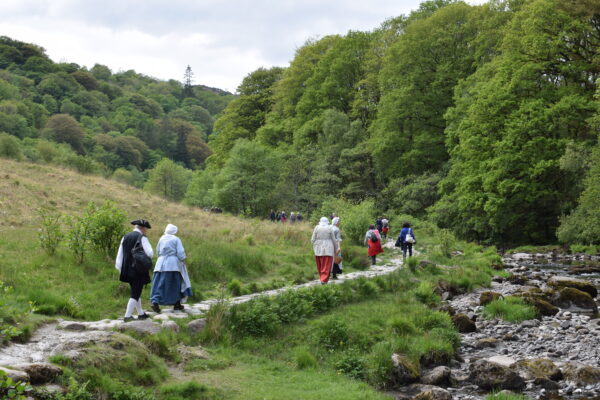 On our way to Grasmere lake

The last station we made our way to was the churchyard of St Oswald’s where we paused at the graves of the Wordsworth family. Here, Lilian spoke to us about the way in which Dorothy might connect us to creativity and the positive effect creative practice can have on health and wellbeing. She quoted Virginia Woolf’s words on Dorothy’s writing, in which Woolf says: ‘If the written word could cure rheumatism I think hers might, like a dock leaf laid on a sting’. However, Lilian also considered Dorothy’s rather more negative assessment of her own creative power – how she felt that no one could mistake her for a writer. The publication of Dorothy’s journals and the poems she did pen has well proven this otherwise, and Lilian drew out Dorothy’s incredible use of language and feeling as she gathered moments in the Grasmere Journal where Dorothy writes about water into a new poem. Having spent our time on the walk using our postcards as journal pages, recording our observations of the world around us and reflecting on our own shared and individual worlds, Lilian encouraged us to use the words we had each written to inspire new creative work.

Lilian helped us to learn more about Dorothy by participating in her own practices of walking and writing. That our friends from Wordsworth House, the birthplace of William and Dorothy Wordsworth in Cockermouth, had joined us in period dress, only added to the sense that we had come closer in experience to Dorothy’s life. 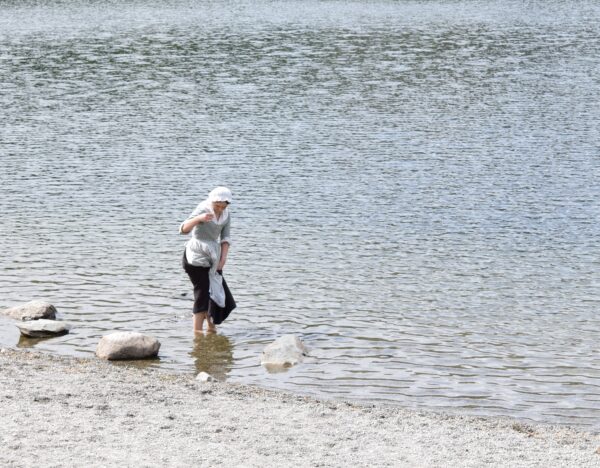 Time to stop for a quick paddle!

After a welcome break of tea, coffee, and cake many of us who had been on the walk made our way to the Reading Room in the Jerwood Centre of the Wordsworth Trust to join with others to listen to Kathleen Winter’s fascinating account of what she has learnt during the process of transcribing Dorothy’s journals of the late 1820s and the 1830s, and to see the journals displayed. These journals have rarely been read and no full transcription exists of them, so the significance of Kathleen’s work cannot be overstated. Having walked in Dorothy’s footsteps with Lilian, Kathleen shared with us her experience of writing in Dorothy’s pen strokes.  The later journals are much harder to read, as Dorothy’s writing becomes looser, so Kathleen has spent much time tracing the shapes of words in order to understand what is written on the page. She spoke about the words that are always clear in the calligraphy, words such as ‘husband’ and ‘oppressive’, and how making the same marks as a person can help you to understand them better, feeling their thoughts in the sweep of the pen or within sharp, cramped strokes.

Kathleen’s talk picked up the themes of our walk with Lilian, as she followed both Dorothy’s hands and feet and considered again patterns of living and of writing. Kathleen reflected on the self-doubt Lilian had drawn out in Dorothy’s own summation of her talent as a writer and considered the way in which Dorothy’s words come to us from a marginal position – the Dorothy of the 1830s is often perceived as a woman whose struggles with illness, disability and pain diminished her creative abilities. Yet, Kathleen challenged the idea that Dorothy’s private, incidental words in the later journals have no power by sharing passages that display her remarkable, precise observations of the world alongside the poignant account of her experience of physical suffering.

Kathleen chose passages thematically from the journals, drawing out interwoven ideas of spring, pain, beauty, joy, and mobility. With a certain inevitability, these passages kept returning to acts of walking and moments when Dorothy was unable to walk. Spring is especially important in the late journals as it regards Dorothy’s ability to get out, to gain the long-desired freedom of the outdoors world. Kathleen noted the change from the 1830 journal, in which Dorothy is still able to walk, to the 1834 journal in which we find Dorothy having to be ‘dragged’ in a little hand-held cart by her ‘trusty steeds’ – sometimes male friends or relatives, more often the Wordsworths’ gardener, James Dixon. For Dorothy, being outdoors and able to commune with nature kept her visionary, quick, and happy, and the late journals attest to her continued passion for nature and her minute, sometimes scientific, sometimes otherworldly observations of it. Yet Kathleen also shared with us the moment in the journals where being outdoors also becomes the thing that causes her pain and fatigue and she must choose to stay indoors in order to prevent suffering. As Kathleen showed us, Dorothy is not afraid to write about pain and her journals record the many ways in which her illness was manifested – ‘pain, sickness, headache, perspiration, heat and cold’; pain which might be ‘twisty and sometimes stitchy’, fatigue that might leave her legs feeling like marble. Through these thought-provoking passages, Kathleen presented to us journals that remain as rich and complex as their earlier counterparts, and a woman who is every bit as alive in their pages. 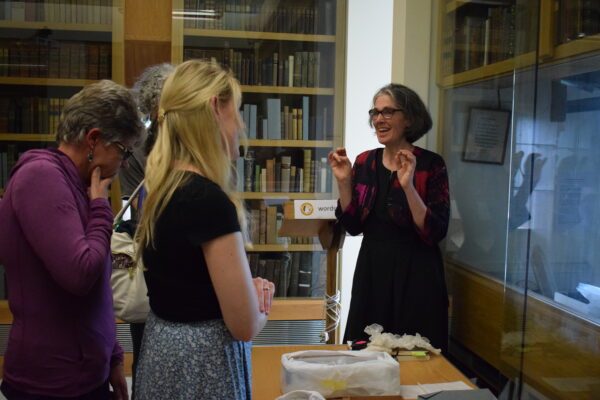 Lilian invited us to walk with Dorothy, a woman whose writing can help us to reflect on our own patterns of living and to cultivate better practices. Kathleen drew us within Dorothy’s later life, and revealed the way in which the power of her words remained undiminished, despite her experiences of pain and disability. For them both, Dorothy’s story remains important and increasingly relevant to today’s world. Together, they thoughtfully opened up the question that we began the day with – why should we read Dorothy Wordsworth? – and encouraged all present to ask it themselves. Undoubtedly we would answer that question in a myriad different ways, but perhaps with one over-arching feeling: that Dorothy Wordsworth should indeed be read.

Dr Hannah Britton completed her PhD at the University of St Andrews before joining the Education Team at the Wordsworth Trust as a trainee last year. She’s interested in questions of place and belonging, echoes, allusions, and inheritances in Romantic poetry, and learning in all its forms. She loves following in the footsteps of the Romantics whenever she can. 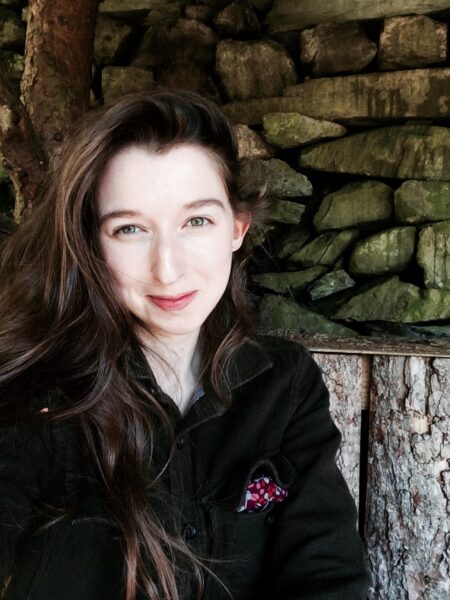