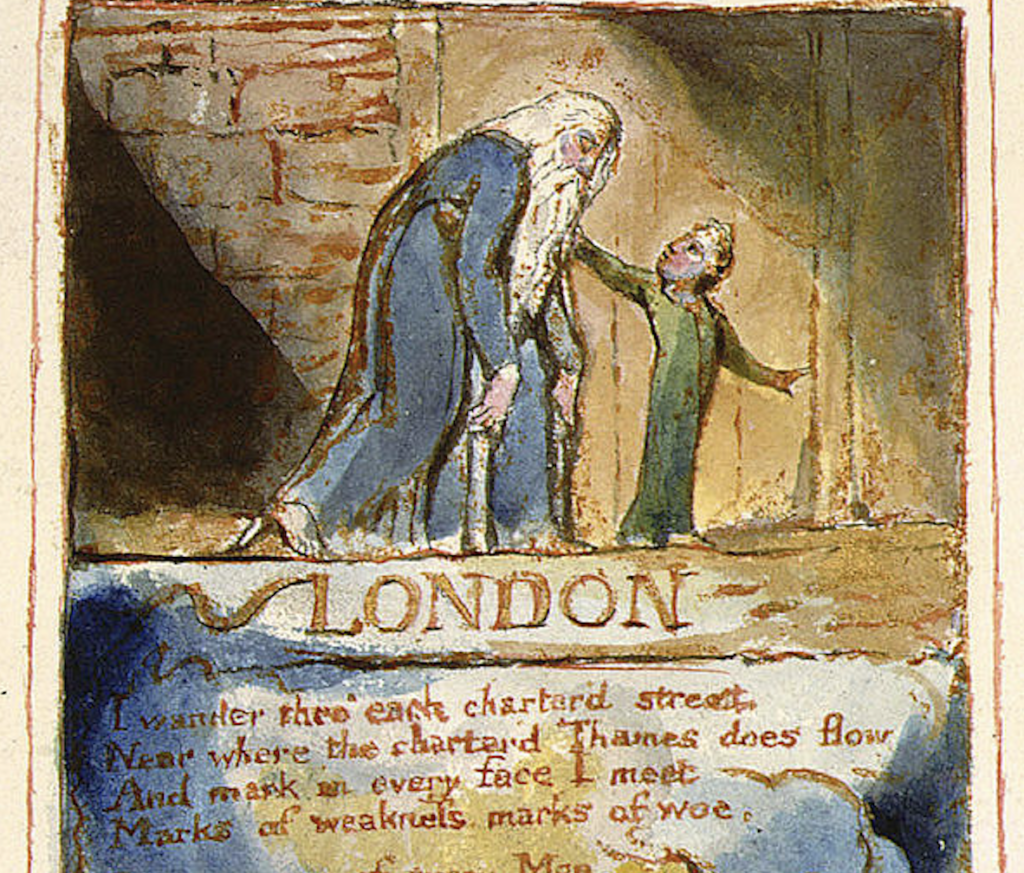 Words Overheard: On the acrostic in William Blake’s ‘London’

By Lynn Shepherd18th May 2021No Comments

Blake’s “London”, with it’s “mind-forg’d manacles”, is a perennial favourite for readers of his Songs of Innocence and of Experience. It’s also a favourite, in Great Britain, of English Literature exam boards, and is regularly presented as a key introductory text to British Romantic poetry for school- and college-aged learners. That makes some sense, with its revolutionary spirit (the blood running down palace walls), its concern with intellectual liberty (those manacles of the mind), and its emphasis on sensory experience. But it’s in that last area that we often make an oversight when reading Blake’s poem. What I’m thinking of is the acrostic Blake works into the third stanza of “London”: 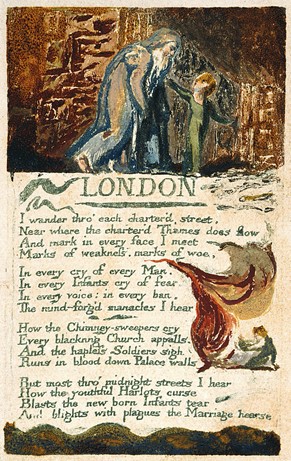 Once seen, it’s impossible to unsee the word “HEAR” running vertically down the page — running, we might say, like blood down a wall, palatial or otherwise. And, of course, that stanza directly follows on from the word “hear”, and concerns, at least in part, heard experiences. The acrostic — a word or words spelt out by the first letters in each line of a poem — is an invitation to hear the cry of chimney sweeps and the sigh of soldiers, as if we might add the imperative “Hear!” to the start of each line. But then that would also suggest, weirdly, that we should be hearing how every “blackning church appalls”, and hearing how a sigh “runs in blood” — “in” and not “like” blood, as we might otherwise be tempted to interpret the line. So what to make of this apparition, the additional occurrence of the word “HEAR”, as it arises in Blake’s poem and so haunts it? 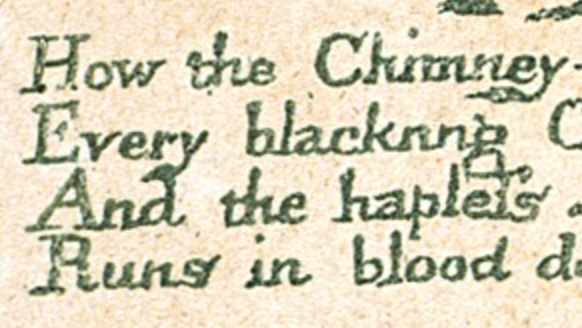 It’s worth saying that, if you hadn’t previously noticed that word in Blake’s poem, you weren’t alone. Acrostics are at once blindingly obvious (once we’ve noticed them), but also something we’re inclined to overlook (there’s no mention of that acrostic in most online study guides for the poem, I note). After all, who goes through poetry looking for hidden words? And, more to the point, what kind of poet writes them in in the first place? Keats, when writing an acrostic that spelt out the name of his sister-in-law, Georgiana Augusta Keats, offered a kind of judgment on the form when he wrote that it was “the first and most likely the last I shall ever do”. It is as though the acrostic is beneath serious poets — too obvious in its methods, and forcing too many concessions onto the rest of the poem’s workings.

Yet there are notable exceptions. Consider Milton’s “SATAN” in Book 9 of Paradise Lost:

with her who bore
Scipio the highth of Rome. With tract oblique
At first, as one who sought access, but feard
To interrupt, side-long he works his way.
As when a Ship by skilful Stearsman wrought
Nigh Rivers mouth or Foreland 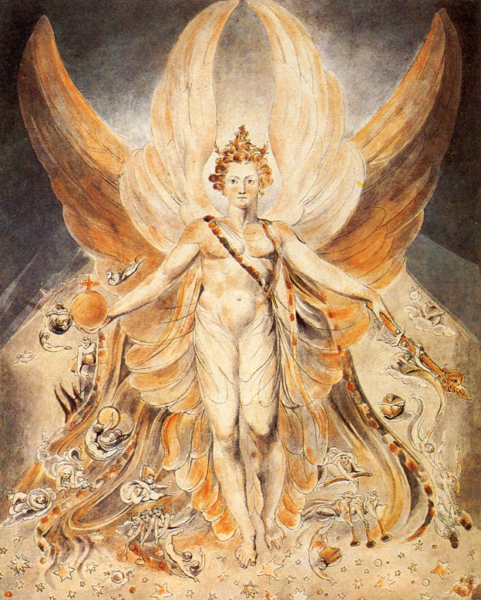 Blake, who was also the author of the long prophetic poem Milton, took Paradise Lost more seriously than most, and if the acrostic was good enough for Milton, Blake likely felt that it could serve him well, too. Yet so uncommon is it as a poetic effect that there’s no readerly expectation to see it, thus it hides in plain sight when it does appear. This might explain why, in “London”, it follows on from the same word, “hear”, in the previous line, whilst also serving to amplify that word. It would be tempting to say that “HEAR” is an invitation to hear, as well as to see, the words in Blake’s poem.

However, if the acrostic is an invitation to hear the poem, then it’s a strange one — after all, unlike Blake’s tightly controlled rhythm and precise terminal rhymes, the acrostic is one feature of poetry that has to be seen, and cannot be heard. Try reading the stanza aloud to a friend: you can bet they won’t hear “HEAR” spelt out in the air. In that muddying of visual and aural perception, we might say Blake is setting us up for the synaesthetic images that follow — those apparent confusions of seen and heard experiences, as in the image of sighing blood, or in the last stanza where we similarly “hear” a tear as it is “blasted” by a curse:

The deeper we journey into “London”, in fact, the more Blake appears to blend conflicting elements, and the verse ends on that well-known image of a “Marriage hearse”. I’m not going to pick apart that apparently contradictory image here, but I’ll just briefly note that it, too, is smuggling a form of the word “hear”; this last stanza opens and closes with an emphasis on what is overheard in London’s streets.

My suggestion, then, would be that the acrostic in “London” works precisely as a form of emphasis. Blake underscores the imperative to “hear” through repetition, yet the acrostic not only furthers that repetition, but it also frames “hearing” in capital letters, in a prominent column that cuts through the central images of the poem. Blake was always preoccupied with the senses and with sensory perception in his poetry in a way that complicates any over-simple idea that he was, as Romantic poet, opposed to that thing we call “the Enlightenment”; Blake was, in a very real sense, trying to expand on empirical philosophy and its claims, and not destroy it or wish it away.

But “London” is about something other than a meditation on knowledge through the senses. It’s about reading the world around us, including the inhabitants of that world — “marking” (verb) the “marks” (noun) in other people’s faces. It’s about that most significant feat of the imagination, the act of empathy: forming an understanding of the lives of others. So, Blake wants his reader to hear, and to listen. It’s useful to remember this about poems, sometimes — that their weirdness and sometimes stubbornness is part of the form, and that the poet didn’t simply make an arbitrary  choice between prose and verse. Instead, poetry makes demands of us, and challenges us with weird things so that we get better at understanding things and experiences very different from our own lives. If we, in turn, understand the frustration Blake felt when he looked at the world around him in the 1790s, we might forgive him for feeling, on this occasion, the need to take part of his message and to spell it out.

Chris Townsend is a Fellow at Christ’s College, Cambridge, where he teaches eighteenth-century and Romantic literature. He writes mainly about form and rhythm in Romantic poetry, and he’s currently at work on a book about how the Romantics read and received the philosopher George Berkeley. 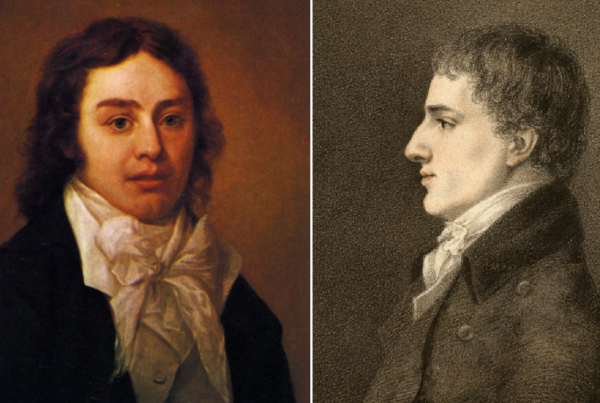 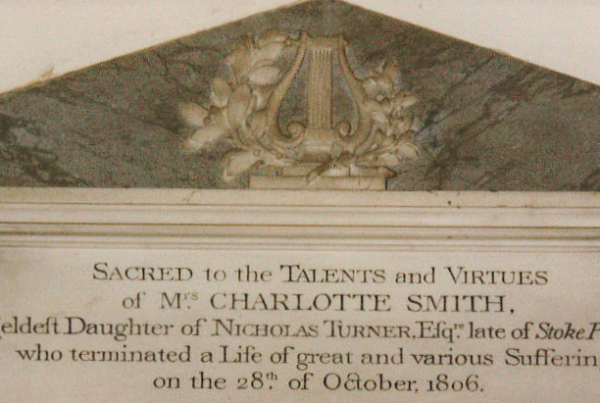